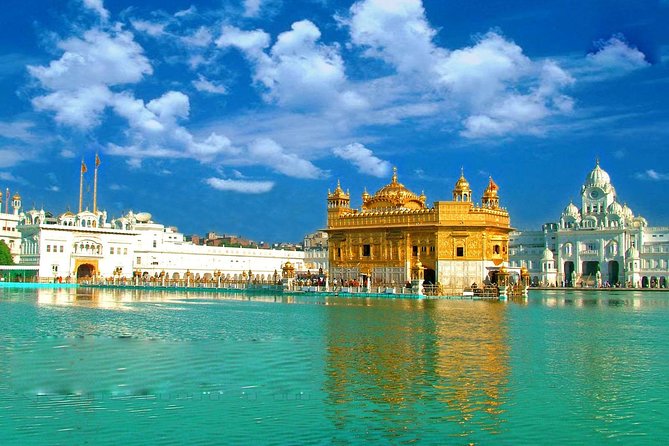 Explore the rich history of Amritsar through this 3 days Luxury tour. Along the way, you'll visit the Indian-Pakistan border to witness the Beating Retreat ceremony, a daily military practice from both country's army, and The golden temple, which attracts over 100,000 worshipers daily. you would be taken to Golden Temple to witness Evening Palki Ceremony when the holy book Guru Granth Sahib is carried to a room for the night

Day 01: Amritsar -On arrival in Amritsar; meet with our representative at the airport, Railway Station or Hotel,( Recommended Arrival Time between 09:00 AM 13:30 PM) you would be transferred to the hotel by a private car. After check in get refresh, later around 15:00 hrs: you would be picked up from the hotel and taken to Wagah border to enjoy the amazing flag lowering ceremony. Watch ceremony from the VIP or foreigner Gallery. (Indian Passport holder Not eligible for VIP Entry, they have sit to in common gallery)

The ceremony starts before sunset with the parade of Indian Border Security Force and Pakistani Rangers. The heavy border gates are opened by an infantryman, then soldiers from both the sides exchange glance of an immense inferno in their eyes, handshake with each other and start lowering the flag of their respective nation, the carefully folded flag carried to the camp. Then again a final glimpse and doors will close with the sound of the trumpet shows the end of the ceremony. The entire ceremony is enjoyed by every visitor with great zeal and calling out Bharat Mata ki Jai, Jai Hind and Vande Matram.After the ceremony, we would drop you back at the hotel for overnight stay.

Day 02: Amritsar (B)Morning breakfast at Hotel, Our tour guide would pick you up from your hotel at 09:00 am and you would be taken for city tour of Amritsar by an air conditioned private vehicle. Our first visit would be for the most beautiful Golden Temple also known as Harmandir Sahib. The Harmandir Sahib familiar as the "Golden Temple" a holy place of Sikh but, this divine place is open for the people of any caste, religion, creed or race. The gold layer surrounded on the upper portion of the temple and its shadow on the lake makes this place unique. After Golden Temple, a chauffeur will take you to the Jalianwala Bagh, it is a garden and spectator of huge bloodbath held in 1919, responsible for the killing of around 1000 innocent, defenseless and unarmed Indians by British Brigadier General Reginald Dyer.

After the Jallianwala bagh, enjoy shopping at Hall bazaar and another local bazaar of Amritsar. You can buy handicrafts, ornaments, books, electronics, garments and many other things. Later, you would be dropped at the hotel.

Evening around 09:00 pm; you would be taken to Golden Temple to witness Evening Palki Ceremony when the holy book Guru Granth Sahib is carried to a room for the night. During this process the devotees sing the Gurbani Kirtan in melodious and devotional tones. After the ceremony, the driver would drop you back at the hotel.

Day 03: Amritsar (B)Have a leisurely breakfast at the hotel. Later, you would be transferred to the Amritsar airport as per your flight Schedule.

Excursion to Wagah Border with Private Car/minibus and Local assistance.

Visit to Local Markets for Shopping.

Watch Wagah Border ceremony from the VIP or foreigner Gallery.

Expense arising out of unexpected circumstances like natural calamities, flight cancellation or delay.

A minimum of 01 people per booking is required.

A maximum of 08 people per booking.

A small amount of walking is involved.

A current valid passport is required on the day of travel.