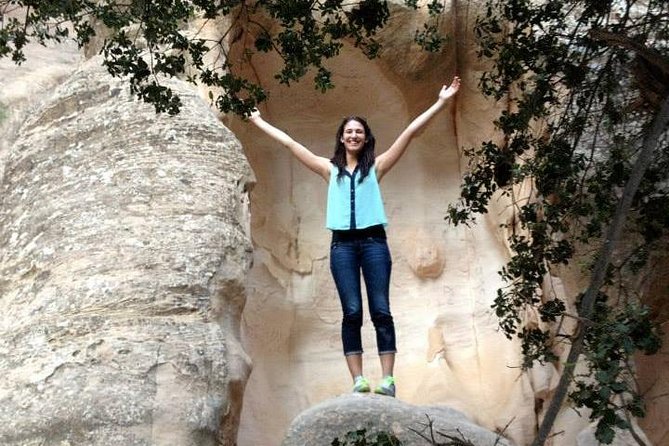 You will be picked up from your hotel or camp in Wadi Musa (Petra), then get ready for one of the best rides of your life during a 3 hour 4x4 safari. A short way along is Petras best views, a breathtaking sweep over the central valley of the ancient city, with many of the monuments in view, dwarfed by the mountains. In the beginning, we will drive about 10 minutes to reach Al Wu'ayra Fort which is located in Wadi Musa, 1 km north of the main entrance of Petra. The fort was built during the reign of Baldwin I (1115 1118 AD) during the Crusades. Next, we will continue the drive and enjoy the view of Petra mountains along the northern way to Little Petra, passing a Bedouin village before we drive-off road from Kharubat Al Fajah and navigate deeper into Little Petra. Here, we will explore more of the landscape before reaching a Neolithic village dated (7200 BC 6500 BC) which makes it one of the first settled villages in human history. During that time, the settlement burned down and was rebuild. After its reconstruction, it was only inhabited for a short while, before being totally abandoned. Remains of the houses and a retaining wall are still visible today. They are remnants of one of the first transitions from semi-settled nomads to settled villagers and the start of an agrarian economy. We then continue driving through the mountains to reach Beir Al Aris, which is considered one of the most amazing examples of Nabataean water systems. The huge well collected water during the rainy season. It was so well built, that it is still in use today and the locals use the water for irrigating their crops. Next, we drive to Siq Al Bard and visit the ancient caves there which were used as caravans stations for the traders who used to pass through Petra. Here we will also explore one of the caves containing one of the best fresco paintings in the region. About this time, the day is drawing to a close so we will drive higher into the mountains of Little Petra where we will reach a nice spot to view one of the most stunning sunsets in the world while enjoying tea over the fire along with a light snack. Afterwards, you will be returned to your hotel or camp in Wadi Musa

Pick-up and drop-off at hotel or camp in Petra