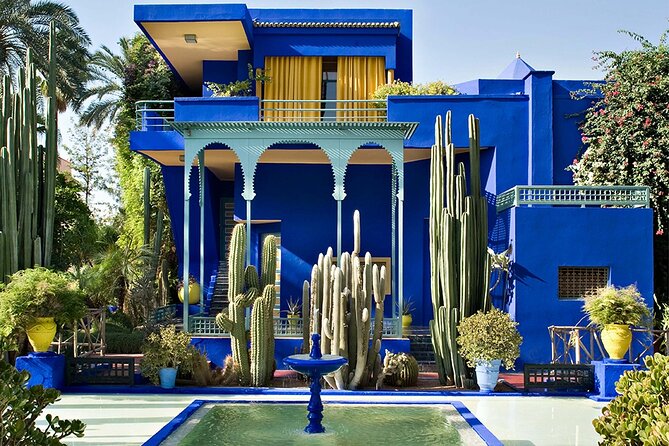 Marrakech is home to plenty of lush, perfectly manicured gardens that provide both locals and visitors with a place of respite from the hustle and bustle of the city. You will discover the botanical wonders of Marrakech on this 3-hour gardens tour. Enjoy the peace and tranquillity of fountains and pools in Majorelle and Secret Gardens, along with the olive groves of Menara Gardens and much more

Enjoy a comprehensive sightseeing tour of Marrakech, exploring the medieval streets of Moroccos Red City through its palaces,monuments and gardens

Following a pick-up from your hotel or riad , explore one of Moroccos oldest imperial cities at sites such as the Koutoubia, one of the largest and most beautiful mosques of the western Muslim world. Marvel at its 221-foot minaret and masterful architecture that evokes the Giralda of Seville.

Continues to a peaceful enclosure in the Kasbah to see the Saadian Tombs, dating back to the 16th century of Sultan Ahmad al-Mansu. Admire the colorful tiles, Arabic script, and intricate carvings, hidden to the world after they were sealed up until 1917.

Next, spend an hour at the 19th-century Bahia Palace, built in 7 years by 1,000 craftsmen from Fez. Intended to be the greatest example of Moroccan and Islamic architecture in the world, a haphazard arrangement of secret apartments open onto inner courtyards, set in the center of a 2-acre garden. See stunning stucco work, Islamic mosaics, and carved cedar wood roofs, surrounded by Moorish-style pleasure gardens of orange and cypress trees, and fragrant jasmine plants.

Continue to the olive groves of Menara Gardens, designed around a rectangular pool that reflects the Atlas Mountains. See the 16th-century pavilion, built during the Saadi dynasty, and used as a summer residence by the 19th-century sultan Abderrahmane of Morocco.

Next, drive alongside the city ramparts, and see one of the most famous gates of Marrakech at Bab Khemis. Stop to explore the exquisite Majorelle Gardens, a superb tropical garden of fountains, pools, a forest of bamboo trees and cacti. Laid out by the expatriate French artist, Louis Majorelle, and later restored by Yves Saint Laurent, distinctive, cobalt blue buildings add shade and harmony to the urban retreat.