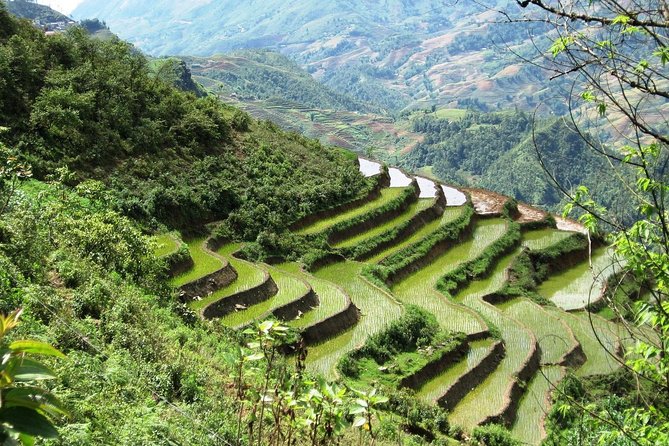 Take a round-trip journey to northwest Vietnam by overnight train from Hanoi to Lao Cai and Sapa, where youll embark on two moderate treks past rice terraces and scenic mountain valleys to local villages. With an experienced private guide at your side, observe the daily lifestyle of the Black Hmong, Red Dao and Dzay people as you interact with villagers and gain insight into tribal traditions. Relax in the evening, with free time to explore the colorful market town of Sapa, including overnight accommodation at a 3 or 4-star hotel.

Day 2: Lao Cai Sapa (B, L, D)
Upon arrival in Lao Cai at dawn, youre transferred to Sapa. You can leave your luggage at the tour office and enjoy a shower plus a full buffet breakfast at Hotel.
Once youre refreshed and fortified, your morning trek departs from Sapa to Ta Phin valley. Walk with your experienced guide through the town for about 20 minutes before turning down a dirt road to Ma Tra, a Black Hmong village defined by its traditional clothing and customs.
The moderate hiking route through this rural community offers more picturesque vistas of vegetable gardens and rice terraces flanked by green mountains rising in the background. You have time to visit with local families and learn about traditional fiber processing before continuing your trek to Ta Phin village, located in one of the most scenic valleys in Vietnam.
Stop here for a simple picnic lunch before exploring the village, admiring the embroidered clothing and red headscarves worn by the tribal women of this ethnic group called the Red Dao.
In the afternoon, youll return to Sapa by private, air-conditioned vehicle to check in to your hotel and eat dinner. Youre free to explore the charming town's sloping streets or the market with many colorful handicrafts, or head up to Ham Rong peak for a fantastic photo op over Sapa (depending on weather conditions; entrance fee not included).
Day 3 Sapa Lao Cai Hanoi (B, L)
Following a hotel breakfast, meet your guide in the morning and depart on a second trek from the town of Sapa to Golden Stream valley. Todays hike offers more stunning views of rice terraces and gardens as well as Mt Fansipan, whose summit rises 10,312 feet (3,143 meters) above sea level.
After crossing a suspension bridge, marvel at the breathtaking scenery as you continue through the Golden Stream valley, stopping at Lao Chai village for lunch.
After your meal, follow your guide on a walk through this village where Black Hmong people reside, and continue on to Ta Van village, home to the Dzay tribe. This part of the hike is relatively easy, though the trail can be quite slippery if it rains, so good footwear is recommended.
Youll visit with some local families and learn about their daily lifestyle and fascinating culture, before departing to the main road to meet up with your driver and return to Sapa.
A shower is available at the hotel, followed by an afternoon free to explore the town on your own.
In the evening, depart Sapa for Lao Cai, where youll take the night train back to Hanoi.

A moderate amount of hiking is involved

Sunscreen, a hat, comfortable shoes and insect repellent is recommended

Rates are based on twin-share accommodations