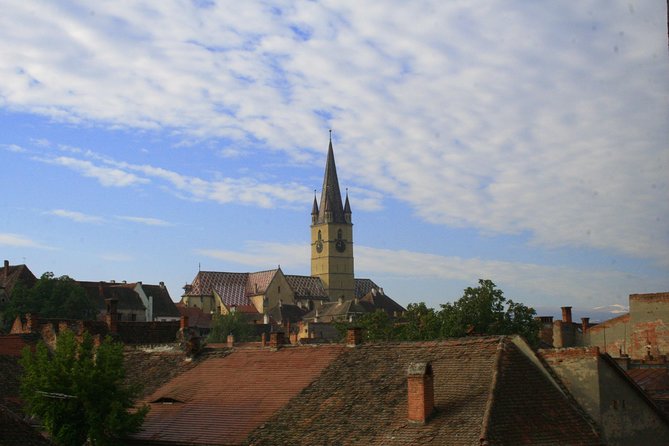 This tour starts fromBucharest the Capitalof Romania and it offers you the opportunity to discover our beautifulRomania. First of all you will visit amazing UNESCO fortified churches, medieval cities, beautiful places and landscapes from Transylvania. The tour will end in Bucharest where you will admireinteresting sights of the city also called the little Paris because of the similar architecture style of the buildings.

DAY 1 Bucharest Sibiu (B, D)
You will meetour English speaking guide at the Airport in Bucharest (OTP) and together you will cross the Carpathian mountains and the spectacular Valley of Olt river. In the afternoonyou will arrive in the biggest medieval city in Romania Sibiu. After you check-in the hotel, you will have thecity tour of Sibiu/Hermannstadt - the European Cultural Capital 2007. You will visit, among others the Evangelical Church, The council tower, The large and the Small Square, the Liars' Bridge, the Brukenthal Palace. Dinner and overnight in Sibiu.
DAY 2 Sibiu Biertan Sighisoara Bran (Dracula Castle) - Brasov (B, L)
In the morning we depart to Sighisoara via Biertan - one of the most important Saxon villages with fortified churches (XV-XVI century) in Transylvania,part ofUNESCO World Heritage Sites since 1993.From here we will drive to Sighisoara one of the most beautiful medieval towns in Romania. City tour of Sighisoara with visit of the Citadel - a 12th century Saxon edifice located in the historic center of the city (still occupied, the citadel is listed as a World Heritage Site), the Clock Tower (inside visit too), the Covered Staircase, Dracula's birth house, the Church on the Hill. Lunch at the famous restaurant Vlad Drakula, located in the same house where the popular character of the British writer Bram Stoker was born. In the afternoon departure to Bran village, where the world famous Dracula castle is located. It is the most curious part of the trip in Romania, which attracts thousands of tourists from all over the world. Accommodation and overnight in Brasov.
DAY 3 Brasov Sinaia Bucharest (B, D)
Breakfast. Sightseeing tour of the really good preserved historical city center of Brasov with the big square, the old city-hall, and the Black Church - the main Gothic style monument in the country. In the afternoon departure to the mountain resort Sinaia, also called "the pearl of the Carpathian Mountains". Visit the Peles Castle, constructed in 1873 as a summer residence of the Romanian royal family. Return to Bucharest and Panoramic tour of the Romanian capital the Royal Palace, the Universitys Library, the City-Hall and other interesting sights of the city also called the little Paris because of the similar architecture style of the buildings. Accommodation, dinner and overnight in Bucharest.
DAY 4 Departure from Bucharest (B)
After breakfast inside visit of Parliament Palace the second largest building in the world after the pentagon in USA. According to your flight schedule transfer to the airport in Bucharest.

Transportantion according to the program

Professional English speaking guide according to the program