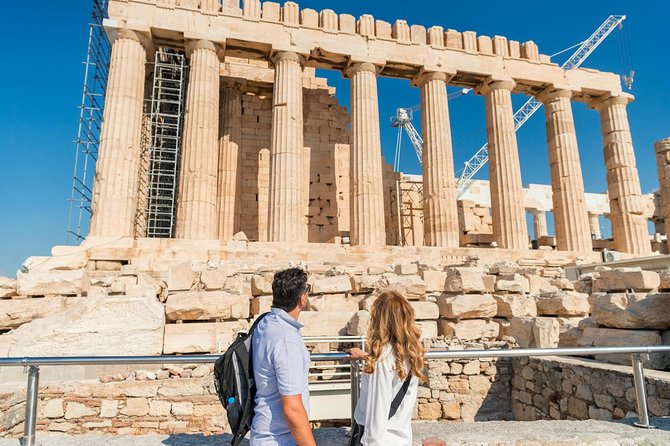 Our Tour spends 4-days in three of the gems of Greece starting with an exclusive luxury chauffeured & go at your own pace tour of the Highlights of Athens (Acropolis, New Acropolis Museum, Temple of Zeus, Hadrian's Arch, Olympic Stadium, Parliament, Monastiraki Square, & Lykavittos hill) with Island hopping by fast ferry to Mykonos & Santorini.
With all transfers in Athens and 3-Nights 4-Star or boutique style Hotels, this is a hassle free & ideal short break & is suitable for small groups, couples, families, & all ages.

Day1. Athens. From your Hotel or cruise ship terminal you will travel in style in one of our new model black Mercedes vehicles with full leather & WiFi as your informative driver stops at all the main sites of Athens. Take as much time as you wish to explore these & your chauffeur will be ready to take you to the next destination & informing you along the way. At the end of the tour your driver will return you to your included Hotel.

The starting time & duration of your tour is flexible with your Chauffeur at your disposal throughout the day. You may also extend your sites with a coastal road trip to Sounion to see the impressive clifftop Temple of poseidon on request (small additional supplement) & for those wanting a greater depth of information & guiding inside the archeological sites the option of an expert Private Licensed guide to accompany you is available on request.

Day2. MYKONOS. Your driver will be waiting at your Athens hotel lobby to take you to the ferry port for your connection to Mykonos (specific times will be communicated after booking), provide the tickets & direct you. Fast ferries are always used if available to make the most of your time & normally arrival in Mykonos will be in the morning & before lunch with the day in front of you to relax, explore the island or enjoy one of the nearby beaches.

Day4. RETURN ATHENS, OR EXTEND YOUR NIGHTS STAY. Arrive in Athens where your driver will be waiting for you to make your final transfer to your hotel, cruise ship, or other location. If you have more time you can extend your days stay in any of the locations on request.

All transfers in Athens

Dedicated English speaking Tour Driver throughout the day in Athens on the first day.

One night 4-Star or Boutique Hotel accommodation in Athens.

Two nights 4-star or boutique hotel accommodation in the islands with breakfast.

All hotels with breakfast

Transfers on the islands. It is most flexible to take low cost taxi trips which wait at each port.

Licensed guide for guiding in archeological sites. Available on request

Ferry times: any changes & updates in ferry times will be communicated after booking up to the day of travel & your driver will also be aware of these for you.

A moderate amount of walking is involved for the Athens sites; comfortable shoes are recommended

Sunscreen and hats are recommended for visits during the summer months

For Professional guiding inside any of the archeological sites please indicate if you want this option when booking and specify which site or sites.