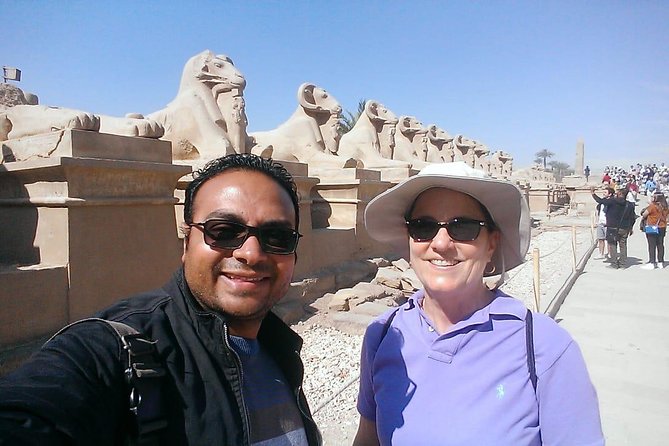 our guide will pick you you from your hotel in Luxor then
1-visit kanak temple
2-luxr temple
3-from Luxor hotel take train to aswan including
4-phile temple , high dam , unfinished obelisk

our guide will meet you at hotel in Luxor
then
1-

Excursion Cairo professional Tour guide in Luxor branch will pick you up from your hotel in Luxor, start your visit in the east bank the Karnak Temples by privat car and private tour guide .

optional stop for lunch then

Karnak temple is the greatest example of worship in history and was dedicated to the God Amon, his wife Mut and their son Khonsu. It was constructed from the beginning of the Middle Kingdom to the Graeco Roman Kingdom.

then you will see the ram headed avenue with big saracrb , don't forget your wish if you walk around the sacarb . ask your guide

At the end of your tour you will be escorted back to your hotel.

Excursion Cairo professional Tour guide will pick you up from your hotel in Luxor, start your tour crossing the Nile River to the West Bank to visit the Temple of Hatshepsut, one of the most striking monuments in Egypt. the famous female ruler of Egypt for 20 years who posed as a male to gain the throne

then you'll visit the necropolis of the ancient city of Thebes. Arriving at the Valley of the kings, burial place of the kings of Thebes (ancient Luxor) The most known tombs are King Tutmosis I, Tutmosis III, Tut-Ankh-Amon, King Ramssess VI, King Mrenptah and AmonhotepII. Then Continue to .

Later you will get to see the Colossi of memnon.

At the end of your tour you will be escorted back to your hotel.
3-we will buy for you train ticket then travel to aswan and relax
4-

Excursion Cairo tour guide in Aswan will pick you up from your hotel in Aswan to start your tour to the High Dam of Aswan which was completed in 1964, an engineering miracle when it was built in the 1960s. Containing more material than used in the Great Pyramid of Cheops, the Dam is 11,811 ft long, 3215 ft thick at the base, 364 ft tall and is carved into from the existing granite, providing irrigation and electricity for the whole of Egypt. Continue to the Unfinished Obelisk in the granite quarries of Aswan where much of the red granite used for ancient temples and colossi came from. The Unfinished Obelisk still lies where it was carved when a crack was discovered as it was being hewn from the rock. Proceed your trip to visit the majestic Philae Temple which was carefully moved to its current location (around 500 meters from the original site) when the construction of the High Dam caused surrounding Nile waters to rise, Philae Temple was built on the honor of goddess Isis the chief deity of the island. At the end of your tour you will be escorted back to hotel

train from luxor to aswan