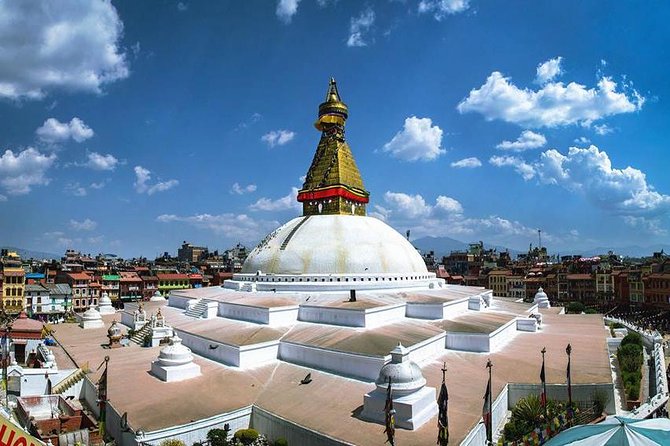 Explore cultural and religioussites of Kathmandu-nepal">Kathmandu by visiting 4 hours Pashupatinath and Boudhanathwith your private guide. Pashupatinath is also known for most Hindu cremation sites. It is believed the person who is cremated in its premises, washed our all sins and will take birth as human again.Boudhanath Stupa is one of the holiest Buddhist sites in Kathmandu. Boudhanath stupa is famous as a wish granted stupa.

Your tour starts by picking up from your Kathmandu accommodation about 9:00 am in the morning and directly drive to Pashupatinath. Pashupatinath is a Hindu Temple dedicated to Lord Shiva, which is located on the banks of Bagmati River. The word Pashupatinath is originated from two words Pashu - animals and Patinath-protector in all it is known as Protector of Living beings. Its existence dates back to 400 AD. It is listed as a World Heritage site by UNESCO's since 1979. This Temple is one of the holy Temple of Nepal as well as of India. Every year a large mass of Indian devotees visit in this Temple. There is an interesting story behind this Temple. According to the legends, there used to be a cow herder whose cow used to offer milk on the ground. One day he followed his cow and found that ground. He dug that ground and found Jyotirlinga of Lord Shiva, which is worship in the main temple. The lingam has four faces in four directions. The east face is called Tatpurusha, The west face is called sadyojata, the north face is called Vamadev, the south face is called Aghora and the uppermost face is called Ishan which is invisible. Pashupatinath is also known for most Hindu cremation sites. It is believed the person who is cremated in its premises, washed our all sins and will take birth as human again. There are many festivals throughout the year. Maha Shivaratri is the major festival here and many people from all over the world come to attend this festival.

Boudhanath Stupa is one of the holiest Buddhist sites in Kathmandu. Boudhanath stupa is famous as a wish granted stupa. It is also declared as the largest Buddhist shrine of Nepal as well of south Asia. Its existence dates back to the 15th Century. It is listed as a World Heritage site by UNESCO's since 1979. This stupa is related to Guru Rinpoche (Padmasambhava) and it is one of the holy shrines for Buddhist people. People believe, one who visit this stupa and pray, their wish is granted. According to the legend, there used to an old lady named Jadzima. She had 4 sons and all of them had great respect for religion. So, they decided to build a stupa. After the completion of the Stupa, the four sons prayed and wished for the next life. The four sons took re-birth, according to their wish. The first one became the King, the second one became the scholar, the third one became the enlightened Padmasambhava and the fourth one became the Minister. Boudhanath lies on the ancient trade route from Tibet which enters from the Sakhu village. Every year, thousands of Tibetans visit and pay homage to Boudhanath Stupa. People also called mini Tibet as many refugees from Tibet live here.

After your Tibetan food in Boudhanth, you will be driven back to your hotel by the help of Guide.

All the Taxes and services charges