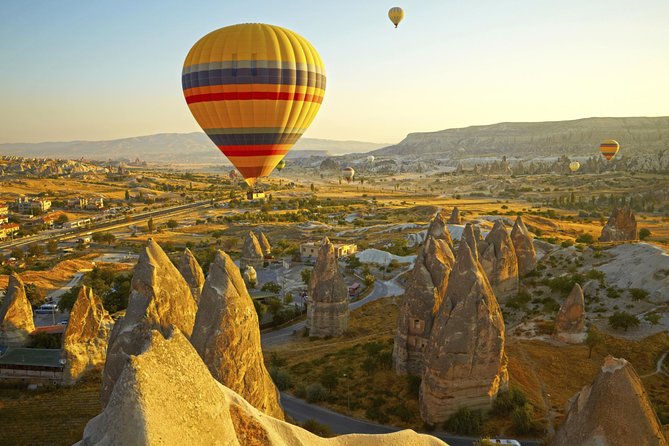 Your 4-night, small-group experience includes a full-day tour of Istanbuls top attractions before you fly to Cappadocia, a stunning region of Turkey famed for its rock cones, caves and villages. Spend two days admiring the otherworldly landscapes before flying back to Istanbul on Day 5, where your tour ends.

Stay in an 'S' Class (Special Class) hotel hotels categorized as offering traditional Ottoman charm in Istanbul for the first two nights, and spend the other two nights at a beautiful, S-Class cave hotel in Cappadocia. Return domestic flights between Istanbul and Cappadocia, daily breakfasts and other select meals are also included. You also have the option of upgrading to include an early morning hot air balloon ride over Cappadocia's landscapes on Day 4.

Day 1: Istanbul Airport or Hotel – Istanbul 'S' Class Mina Hotel or Similar
Start your experience with a transfer from Istanbul Atatürk or Sabiha Gokcen Airport to your 'S' Class hotel. Or, if you're already in Istanbul, enjoy a transfer from your central Istanbul hotel to the 'S' Class Mina Hotel or similar. After you've checked in, the evening is yours to spend as you wish. Perhaps enjoy dinner at the hotel or any of the city’s tempting array of restaurants.
Overnight: ‘S’ Class Mina Hotel or similar in central Istanbul
Day 2: Istanbul (B, L)After breakfast, meet your guide at your hotel and set off on a city tour to see Istanbul’s Ottoman and Byzantine highlights. Board a luxury Mercedes minivan and drive into old Sultanahmet, designated a UNESCO World Heritage site for its mosques, palaces and relics that date back to these two, powerful empires, when Istanbul was known as Constantinople.
Take in Topkapi Palace, seeing the precious treasures of what was the Ottoman seat of power between the 15th and 19th centuries, and admire the spectacular Hagia Sophia, once the greatest church in Christendom before it was converted to a mosque in 1453. See its dome and golden Byzantine mosaics and listen as your guide recounts its turbulent history.
After a delicious lunch at a local restaurant, head inside the Blue Mosque to view its vast expanses of blue Iznik tiles, and pose for photos at the Hippodrome, a city park that once staged ancient chariot races. Then, head into the Grand Bazaar to peruse its massed ranks of souvenir, carpet and trinket stalls.
In the late afternoon, enjoy a drop-off at your hotel in time for dinner (own expense).
Overnight: ‘S’ Class Mina Hotel or similar in central Istanbul
Day 3: Istanbul – Kayseri – Cappadocia (B, L)After an early hotel breakfast, travel by minibus to the airport for your flight to Kayseri in central Turkey. After your 1.5-hour flight, meet your guide and drive to the north Cappadocia region in an air-conditioned Mercedes minibus, your transport for the duration of your Cappadocia tour.
Start at the Devrent Valley, where volcanic cones and ‘fairy chimneys’ — mushroom-shaped pinnacles — crowd the hillsides. Discover from your guide how wind and water erosion shapes the formations, and then visit Monks Valley, whose conical rocks once offered seclusion for monks and hermits.
After a stop at the pottery town of Avanos and lunch at a local restaurant, admire the hand-carved dovecotes of Pigeon Valley and visit Göreme Open-Air Museum. Roam the rock-cut chapels of this UNESCO-listed gem to see the vivid Byzantine frescoes on their walls, and continue to Uchisar Castle, a stunning natural rock castle riddled with tunnels and chambers.
Later, travel to your boutique cave hotel and enjoy dinner (own expense) and the evening at leisure.
Overnight: ‘S’ Class Courtyard Cave Hotel or similar in Cappadocia
Day 4: Cappadocia (B, L)If you’ve upgraded, begin your day with an unforgettable hot air balloon ride. Enjoy a tasty buffet breakfast at the balloon station and then take in breathtaking aerial views on a 1-hour ride. Drift high over the sunrise-lit mountains and take photos of the rock villages, canyons and caves below.
Following your flight or — if you haven’t opted for the balloon ride — breakfast at your hotel, travel to south Cappadocia to scout out more natural wonders. Begin at Derinkuyu Underground City, an incredible cave-city dating back to Hittite times that is the deepest of its kind in Cappadocia. Explore its courtyards, tunnels, rooms and even its cemeteries, where the dead were buried until they could be taken above ground.
Continue through the stunning, 10-mile (16-km) gorge of the Ihlara Valley and visit Selime Monastery, an astonishing monastery-fortress complex hewn in the 13th century and consisting of a vast, hollowed-out cathedral, monastic quarters and secret passageways.
See the cliff-face caves and houses at Yaprakhisar as your guide reveals how they featured in several Star Wars movies. Then, visit the gigantic Agzikarahan Caravanserai, a 10th-century stone compound complete with refectories and chambers that provided much-needed shelter for the caravan trains that traveled the ancient Silk Road.
Return to your hotel by minibus and spend the evening as you wish.
Overnight: ‘S’ Class Courtyard Cave Hotel or similar in Cappadocia
Day 5: Cappadocia – Kayseri – Istanbul (B)After breakfast at your hotel, transfer to Kayseri airport for your return flight to Istanbul. Upon arrival in Istanbul, conclude your tour with a drop-off at Istanbul Atatürk Airport, Sabiha Gokcen Airport, or your original starting point in Istanbul.

Meals as per itinerary (B= breakfast, L= lunch, D= dinner)

Pickup from your hotel on Day 3 is at 6am