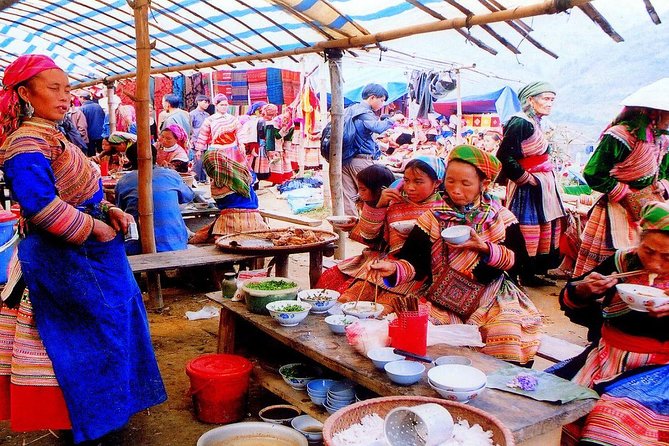 A trip into the mountains to the bustling local market of Bac Ha. Many ethnic minorities converge here to buy and sell their goods in a real local experience. Its the best place to experience the unique ethnic vibe of the region. Visit a local palace a throwback to 20th century feudalism in the area and have lunch with a local Tay minority family before taking a boat trip down the river to finish the tour.

20:30:Pick up at our office or your hotel in Old quarter and transfer to Hanoi railway station for boarding to Laocai.Overnight on the A/c soft sleeper Cabin. ( 4pax/cabin) you will share cabin with another tourists.

Early check in is possible when you arrive if the room available otherwise we will provide you a basic room where you can have shower.

Start the trip at 9:30 as below. (Private trekking tour)

First start of 6km of walking down to the south east of Sapa along the side of Muong Hoa valley to Y Linh Ho village of the Black Hmong. Continue a 2km-trekking down to Lao Chai village, through terraced rice fields to Ta Van village of the Dzay minority people. Lunch at a local family, it gives you a worth chance for you to learn about the local house architecture which is full of their daily life styles and exclusive custom. Enjoy the landscapeson the way. Last trek is about 2Km to the bus stop in Tavan then get back to Sapa by jeep or minivan.. Overnight in hotel.

After breakfast we will start to trekking walk down to the South-west of Sapa to visit Cat Cat village of the Black Hmong. Relax at the food of the stunning waterfall and the vestige of a hydroelectric power station that was constructed by the French during the colonial time in Vietnam. Enjoy picnic lunch by the side of the river, and then next to Sin Chai, the village located at the foot of Fansipan Mountain, the roof of Vietnam and Indochina. From here you can enjoy huge stunning landscapes before climbing up on the way a Car to return to Sapa. Overnight in hotel.
Day 4: Bac Ha market (Sunday)(B,L,D)

Located at 110km from Sapa, Bac Ha mountain town is well-known by travelers with the most colorful market of the hill tribes in the North of Vietnam. This every-Sunday-market attended by at least 8 ethnic groups and last from 9:00 AM until 2:00 PM. It is also chance for tourists to discover the Hmong Kings palace (old building built by the French & Chinese).

In the afternoon, we go for a light trek to visit Ban Pho, the village is home to flower Hmong minority. We are invited to enter several local houses to have some green tea, corn wine, listen to the host talking about their family, talk to them and then enjoy landscapes on a roundabout way to Bac Ha for get back to Lao Cai to catch the train.

The train will arrive Hanoi station around 5am, tour will be finish.

All price is in USD per person.

If you have any inquiries, please do not hesitate to contact us via email: info@asiatravelimage.com