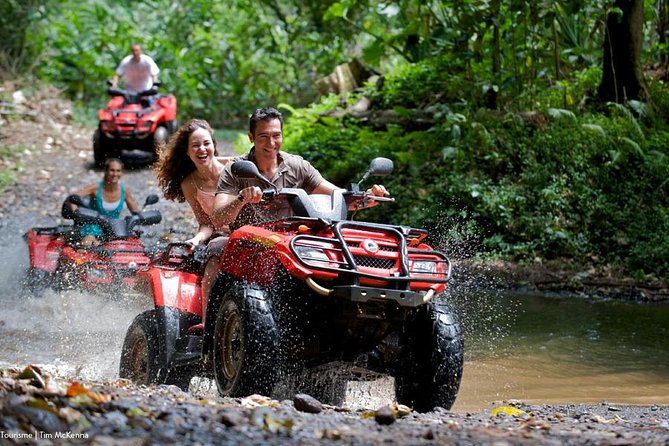 Rev up your engine and enjoy a front seat view of the Caribbean's most spectacular sights and views. Bumpthrough the Dominican Republic's lush landscape in a powerful 4x4 off-road quad bike during this 4.5-hour Eco-adventure from Punta cana. With oversight from your local guide, drive your all terrain through the forest to reach an organic farm, stopping to taste the rich flavor of organic Dominican chocolate, coffee and rum. Bike to the Taino Ecological Park, and 'Adventure Cave' for a dip in a freshwater cenote. Just imagine the natural beauty of an underground cave filled with the freshestnatural spring water ever seenand then imagine taking a dip in it. Head for Macao beach to relax and enjoy the sand and waves. Round-trip transportation from Punta cana hotels is included.

Get off the beaten track in a 4x4

Be picked up from your Punta cana hotel in the morning, noon, or afternoon. Once you've arrived at Rancho Quad Bike, you will receive brief health and safety instructions by your friendly professional guide and this is when the fun begins. Turn on your engine and get ready for the adventure of a lifetime as you discover spectacular places feeling the cool breeze as it caresses your face. Travel on rough roads between forests and lush tropical gardens, to reach our organic farm. Here you will learn facts about coconut oil, snuff, and rum. You will also taste the rich flavor of Dominican homemade coffee and chocolate.

As you continue on, admire picturesque typical Dominican houses, palm trees and banana plantations andshare our most significant natural resource, the Taino Ecological Park. Once there, enjoy a stunning natural landscape and dip in one of the two available freshwater natural springs.

Next, discover a coast whose beauty words cannot describe, Macao beach. With panoramic ocean view and the Macao Headland, it is a very beautiful place due to its white sandy limestone walls, ideal for spectacular photographs to remember. Be sure to shop at a beautiful souvenir gift shop (at own expense).

Head back to the quad bike shop and be dropped off back at your hotel accommodations in the afternoon.

Visit to Macao Beach and Farrallon

Not suitable for pregnant travelers

Not suitable for people in drunken state