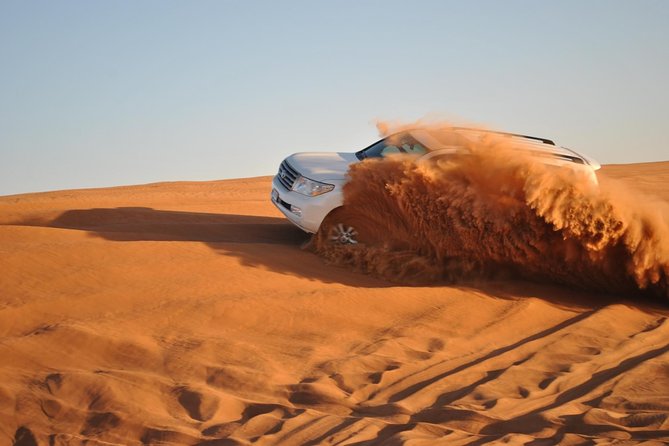 Leave Dubais skyscrapers for the empty desert and dunes on this 6-hour desert and Arabian cultural experience. Travel into the desert by 4x4, and enjoy a host of activities, including a dune bash, camel ride, sand boarding, henna art, and more. Finish with a tasty barbecue dinner under the stars, along with fire dancing, magic, belly dancing, and dervish-style tanoura shows. Hotel pickup and drop-off, dinner, and live entertainment included.

After Dubai hotel pickup at about 3pm, hop inside a comfortable, air-conditioned 4x4, and set off onyour 6-hour desert experience. Watch as desert sands replace the citys skyscrapers, and hear about the deserts ecology from your guide.

Enjoy a dune bash with a professional driver at the wheel of your 4x4, and visit a camel farm in the sands. See these hardy animals up close and enjoy a camel ride around the enclosures.

Next, continue off-road to a desert camp set among rolling dunes. Here, grab a sand board andenjoy surfing down the slopes.Get tips from your guide on mastering your board, and increase your speed as your confidence builds.

As the sun sets, relax at the camp, and if you wish, get a henna tattoo on your hands or feet, and puff a shisha (Arabic water pipe). Then, savor a succulent barbecue buffet dinner of classic Arabian dishes like hummus (chickpea dip) and marinated chicken. See the Itinerary for a sample menu.

Your desert experience then concludes with a Dubai hotel drop-off at about 9pm.