5-Day Iona, Mull And The Isle Of Skye Small-Group Tour From Edinburgh - With Reviews & Ratings

5-Day Iona, Mull And The Isle Of Skye Small-Group Tour From Edinburgh 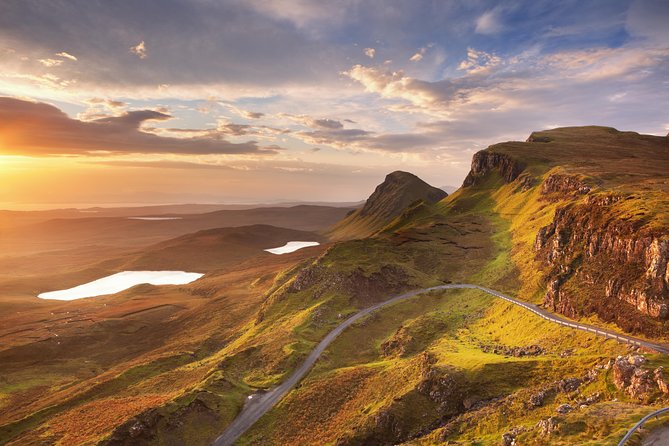 Visit four romantic Scottish islands in five days on a small group excursion from Edinburgh.
You'll explore some of the most dramatic and beautiful scenery on Scotland's rugged west coast, and visit the fabled islands of Mull, Iona, Staffa and Isle of skye.

Stop At: Loch Lomond National Nature Reserve, Loch lomond and the trossachs national park, Scotland
One of Scotlands largest lochs. Admire the views and take postcard-perfect photos to share with your friends and family.
Duration: 30 minutes

Stop At: Inveraray Castle, Inveraray, Argyll and Bute, Scotland
You venture through the impressive mountains of the West Highlands and the magnificent whitewashed 18th Century town of Inveraray, home to the Campbell Clan and the Duke of Argyll.
Duration: 30 minutes

Stop At: Oban
This Victorian harbour town offers excellent seafood and a charming intimacy. This will be your base for the next 2 nights.
Duration: 5 hours

No meals included on this day.
Accommodation included: Overnight in Oban.

Stop At: Isle of Staffa, Isle of Mull, The Hebrides, Scotland
(optional boat trip)
Felix Mendelssohn, who visited the uninhabited island of Staffa, off Mull, in 1829, was inspired to compose his 'Hebrides Overture' after hearing waves echoing in the impressive and cathedral-like Fingals Cave. The cave walls and surrounding cliffs are composed of vertical, hexagonal basalt columns that look like pillars (Staffa is Norse for pillar island). You can land on the island and walk into the cave via a causeway. Nearby Boat Cave can be seen from the causeway, but you cant reach it on foot. Staffa also has a sizeable puffin colony, north of the landing place.
Duration: 3 hours

Stop At: Iona Abbey and Nunnery, Isle of Iona, The Hebrides, Scotland
You take the small ferry to Iona, birthplace of Celtic Christianity, and ancient burial ground of Scottish Kings. Here you can visit the historic abbey with its intricate carved crosses in the churchyard, or explore rocky headlands and sandy coves.
** Passengers may have less free time on Iona, if they opt for the Staffa boat trip.
Duration: 3 hours

No meals included on this day.
Accommodation included: Overnight in Oban.

Stop At: Castle Stalker, Appin, Argyll and Bute, Scotland
Located in one of Scotland's most beautiful spots and dramatically sited on a small island at the mouth of Loch Laich.
Duration: 30 minutes

Stop At: Glencoe Mountain, Ballachulish, Glencoe, Scottish highlands, Scotland
The scenery of Glencoe is breathtakingly beautiful!
From the spectacular 3 Sisters to the Majestic Buachailie Etive Mor, this has got to be one of the most beautiful places in Scotland!
Duration: 15 minutes

Stop At: Plockton Harbour, Plockton, Ross and Cromarty, Scottish highlands, Scotland
The picturesque village of Plockton boasts an incomparable location on a sheltered bay of Loch Carron surrounded by a ring of hills.
Plockton has a charming seaside setting and the road follows the bay with a chocolate-box row of neatly painted cottages arranged around the curve of a tiny harbour. The village is backed by a craggy landscape of heather and pine.
Duration: 4 hours

No meals included on this day.
Accommodation included: Overnight in Plockton.
* Please note that Friday departures will stay in Portree instead.

Day 4: Touring around Isle of skye

Stop At: Dunvegan Castle & Gardens, Dunvegan, Isle of skye, The Hebrides, Scotland
(optional)
Any visit to the Isle of skye is incomplete without savouring the wealth of history and clan legend on offer at award winning 5* Dunvegan Castle & Gardens.
Built on a rock in an idyllic loch side setting, Dunvegan is the oldest continuously inhabited castle in Scotland and has been the ancestral home of the Chiefs of Clan MacLeod for 800 years.
Duration: 1 hour

Stop At: Portree Harbour, Portree, Isle of skye, The Hebrides, Scotland
Set round its natural harbour and fringed by high ground and cliffs, the town is a popular tourists holiday destination and the harbour continues to be used by fishing boats as well as pleasure craft.
Duration: 1 hour

No meals included on this day.
Accommodation included: Overnight in Plockton.
* Please note that Friday departures will stay in Portree instead.

Day 1: Edinburgh - Oban
Today takes you west to Scotland's first National Park around Loch Lomond, stopping at the charming conservation village of Luss set on the loch's 'bonny, bonny banks'. Travel through the impressive mountains of the West Highlands through the magnificent white-washed 18th Century town of Inveraray, home to the Campbell Clan and the Duke of Argyll. The afternoon will be spent in the heart of Argyll exploring the ancient Kingdom of Dalriada and the standing stones of Kilmartin before arriving in the beautiful fishing harbor town of Oban, gateway to the islands, for the next two nights accommodation.
Overnight: 3- or 4 -star accommodation in Oban

Day 2: Oban
Today is an early start crossing on the ferry to Mull and enjoying an island adventure exploring her dramatic coastlines and wild beauty, before taking the small ferry to the peace and tranquility of Iona - birthplace of Celtic Christianity and ancient burial ground of Scottish Kings. Here you are at leisure to visit the historic Abbey with its intricate carved crosses in the churchyard or explore the rocky headlands and sandy coves of this island gem. There is also an opportunity to take a small boat out to the island of Staffa and view the dramatic basalt columns immortalized by Mendelssohn in his Hebridean Overture 'Fingal's Cave'. Return on the ferry to Oban for your second night.

Overnight: 3- or 4 -star accommodation in Oban
Day 3: Oban - Portree
Today takes you north along the west coast around Appin, passing the impregnable Castle Stalker and Glencoe, scene of the infamous massacre of the Clan Macdonald in 1692. Pass through Fort William and travel on to the small town of Mallaig to catch the ferry to Skye. Crossing over the sea, travel up to the picturesque harbor town of Portree. You will be dropped off at your accommodation in the early evening where you are free to go out and explore the town.
Overnight: 3- or 4 -star accommodation in Portree

Day 4: Portree
Today is a very flexible day on Skye. There are many possibilities depending on the weather and the dynamics of the group. Your driver with his extensive knowledge will choose the best plan for the day. For example: travel north to the stunning Quiraing mountain pass and enjoy a spectacular walk through some of Skye's extraordinary geological scenery, visit Kilt Rock, composed of basalt columns (reminiscent of the pleats in a kilt) with it's waterfall cascading over the cliffs and down into the sea below. Or a walk out at the most westerly point on the island at Neist. Or go over to Dunvegan Castle, ancient ancestral seat of the Clan McLeod. Talisker Distillery is also located on the isle, as are the famous Cuillin Hills. Return to your accommodation in Portree in the early evening for your second night in Portree.
Overnight: 3- or 4 -star accommodation in Portree

Day 5: Portree - Edinburgh
You will be collected from your accommodation and travel south passing by part of the magnificent Cuillin Hills, leaving the island via the Skye bridge. The tour then takes the 'Road to the Isles' through the splendor of the Five Sisters of Kintail, the mountains guarding the pass. Stop to visit the famous stronghold Eilean Donan Castle, used in the film Highlander, set at the junction of three lochs as protection against Viking raiders. From here, will continue east through Glen Sheil and Glen Moriston to Loch Ness, where you will stop in the small Highland village of Fort Augustus at the south end for your chance to try and spot the monster. There is a boat trip (summer only) available here that will get you that little bit closer! Continuing south now through the Grampian Mountains along Loch Laggan, made famous now as 'Monarch of the Glen Country' before passing Dalwhinnie, home to Scotland's highest whisky distillery, and onwards into Highland Perthshire for a final walk and coffee break in the fresh northern air. Continue south past Blair Castle, returning back to Edinburgh via Perth and over the Forth Road Bridge. Arrive into Edinburgh in the early evening where the tour will conclude.

All ferry crossings, except optional trip to Staffa

Children are not permitted to travel alone. Child rate applies only when sharing with at least 1 paying adult

Minimum age for travel on this tour is 5 years

Please note: you will be required to choose between either a 3-star bed and breakfast or 3-star hotel at time of booking

Booking three or more people: we can accommodate up to 8 guests in a group, please add each required room to your basket separately

When booking three or more people, efforts will be made to book a combination of suitable rooms (double/twin/family). Preferences should be noted upon booking in the Special Requirements section

Family rooms are limited and may be available on request. Maximum of 2 Adults and 1 child in one room. Family rooms for 2 adults and 2 children are not available

Luggage Allowance: You're restricted to 14kg (31lbs) of luggage per person on our tours. This should be one piece of luggage similar to an airline carry-on bag (approximately 55cm x 45cm x 25cm / 22in x 17in x 10in) plus a small bag for onboard personal items.