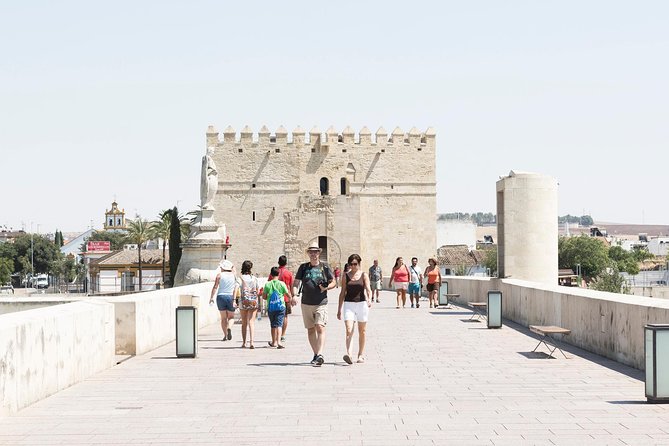 Head out of Barcelona on a five-day tour of Andalucia's most popular cities: Seville, Cordoba, Granada, and Toledo. Explore several UNESCO World Heritage Sites including the Alhambra, soak in the rich history, and discover hidden gems on this 5-day Spain tour. Choose to start your tour by high-speed AVE train, and travel from Barcelona to Madrid in just three hours or alternatively, enjoy a leisurely coach journey between the cities and visit Lerida and Zaragoza, too.

From Barcelona, your five-day tour of Andalucia's loveliest cities Cordoba, Seville, Granada, and Toledo starts with a journey through the legendary country of Don Quixote to reach Cordoba. This 5-day Spain tour will take you to some of the best spots which include -

- Your city tour of Cordoba's cathedral-mosque and Jewish quarter will reveal a beautiful network of streets, alleys, squares and whitewashed courtyards, reflecting the importance of the city in the medieval period.

- Next, head off to Seville to take a tour of this beautiful city's many highlights, including the cathedral, gardens, and Santa Cruz quarter. Built on the banks of the Guadalquivir River, lively Seville has a rich Arab legacy and colorful local districts like Triana and La Macarena.

- Continue your tour to Granada to see the amazing Arab architecture of the Alhambra, the last stronghold of the Moorish kingdoms until 1492 and one of Andalucia's special highlights.

- Your tour also includes a visit to the World Heritage city of Toledo. You will discover a glorious city filled with amazing medieval architecture.

Led by a local guide, your 5-Day Spain Tour: Cordoba, Seville, Granada, And Toledo From Barcelona is bound to be the best!

Day 1: Barcelona – Madrid
If you have chosen to start your tour by high-speed AVE train, receive your tickets in advance, and then leave Barcelona-Sants Station by train. After roughly three hours, arrive at Madrid Atocha Station, meet your driver and travel to your hotel by minivan. Check in and spend the rest of your day at leisure, perhaps exploring Madrid independently and eating out in town (own expense).

Alternatively, travel by air-conditioned coach from Barcelona to Madrid, and enjoy stop-offs in the picturesque towns of Lerida and Zaragoza. Including free time to explore each town, the journey takes roughly ten hours.

Day 2: Madrid – Cordoba – Seville (B, D)
After breakfast, leave Madrid and travel through the land of Don Quixote, the Man from La Mancha. In Cordoba, you’ll have time for lunch (additional cost) and a city tour of the Mosque and Jewish Quarter. Continue to Seville for the evening.

Day 3: Seville (B, D)
After breakfast, enjoy a morning city tour, which includes the exterior of Seville Cathedral, the Santa Cruz Quarter and the Maria Luisa Gardens. The afternoon is yours to discover beautiful views and explore this city full of light.

Day 4: Granada - Alhambra - Generalife Gardens (B, D)
After breakfast, depart via the Califato road to Granada. You will visit the Alhambra, the last stronghold of the Moorish Kingdoms up to 1492, and its Generalife gardens. This is an amazing monumental environment that is one of the most popular attractions in Spain.

Day 5: Granada - Toledo - Madrid (B)
After breakfast, depart for the Imperial City of Toledo, a UNESCO World Heritage Site, where all the cultures and eras of Spain (Christians, Moorish and Jewish) have lived together. After lunch (own expense), you'll take an impressive tour of the city’s important monuments and sights, like the famous Damasquinado (gold and silver inlaying in iron).

You will then head to Madrid, where your tour ends.

Please note - The hotels detailed above are as a reference only and are subject to change.

Infants aged 3 years and under are free of charge, providing they do not occupy a seat on the bus. Please note, any expenses incurred at the hotel (ie. cot, meals, etc) should be paid directly to the hotel.

There is no bathroom on the coach.

Each traveler is allowed a maximum of 1 suitcase.