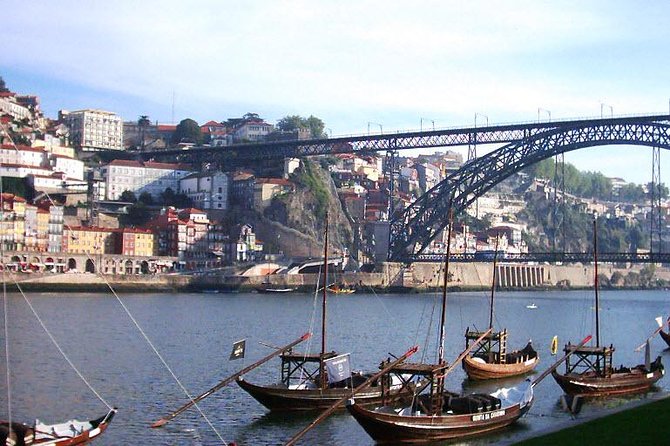 Explore northern Portugal on a 6-day tour. Departing from Lisbon, discover important cities like Porto and Braga, as well as historical locations like Coimbra, Guimares, bidos, and Aveiro. See religious sites like the Batalha Monastery, Our Lady of Ftima Sanctuary, and the UNESCO World Heritage-listed Convent of Christ in Tomar. Take in views of Portuguese vineyards and coastal roads from your coach, and have plenty of free time during the day and night to discover more on your own.

Experience northern Portugal on this six-day tour from Lisbon to the country's renowned cities and historical monuments. Discover bidos, a beautiful medieval village; Aveiro, known as the Venice of Portugal; and Coimbra, home to one of the most ancient universities in the world and the beautiful Mateus Palace gardens. Spend time in Porto, a UNESCO World Heritage Site, and visit the city's Stock Exchange Palace and St Francisco Church. See historical monuments like the Batalha Monastery (Mosteiro Santa Maria da Vitria), the Alcobaa Monastery, the Cathedral of Braga, Amarante's So Gonalo Convent, Our Lady of Ftima Sanctuary and the Convent of Christ in Tomar.

During your six-day tour you will learn interesting facts about the attractions and cities from your guide, who will lead you through the Main sights of the locations you visit. You will also have free time to explore more on your own in the towns of Nazar, Guimares, Barcelos, Viseu and Tomar.

Five nights of accommodation in superior-class hotels and five continental or buffet breakfasts are included.

Please see the Itinerary section below for details on each day of the tour.

There is no toilet on board the coach

The tours may be changed without prior notice

A moderate amount of walking is involved