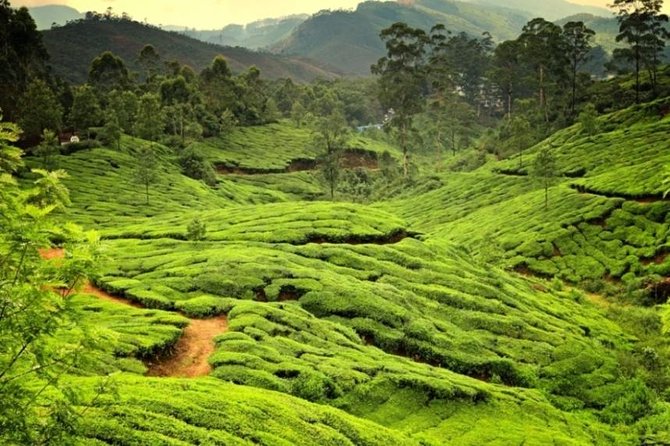 Everything about Kerala is heaven. Book this amazing Kerala tour with 6-nights' accommodation to see the best that it has to offer. It's a very different aspect of India, where man has made a perfect ecological balance with the nature. Kerala is all about the breathtaking views of tea-plantations, well maintained national parks and wildlife sanctuaries, pristine beaches and enchanting back-waters (one of the best in the world). This tour covers a little of all the elements that make Kerala "God's Own Country". The resort in Munnar is specially chosen to give you a closer to the nature experience, located in desolation in the push green tea plantations, which will be your own fortress of solitude. From the hills of Munnar to Periyar National Park, and from the secluded beaches of Kollam to the serene backwaters of Alleppey, everything is a lifetime experience.

Pass By: Tea Gardens, Munnar, Idukki District, Kerala
Arrive at Kochi by flight before noon. The private car will pick-up from airport and head straight to Munnar, South India's largest tea-growing region, carpeted in emerald-green tea plantations, contoured, clipped and sculpted like ornamental hedges. After a 5 hours drive reach Munnar by evening. Check-in at hotel on arrival. In the evening head out to see Kalaripayattu Show. Kalaripayattu is an ancient Indian martial art, which originated as a style in Kerala.
Dinner & overnight stay at Munnar.

Stop At: Periyar National Park, Thekkady, Idukki District, Kerala
After breakfast check-out from hotel & head towards Periyar. The very sound of the word Thekkady conjures up images of elephants, unending chains of hills and spice scented plantations. The Periyar forests of Thekkady is one of the finest wildlife reserves in India. Spread across the entire district are picturesque plantations and hill towns that hold great opportunities for treks and mountain walks.
Reach Periyar by early evening and check-in at the hotel on arrival. In the evening head out to see Kathakali show (a very popular Indian classical dance form).
Overnight stay at hotel in Periyar (Thekkady).

Stop At: Periyar National Park, Thekkady, Idukki District, Kerala
Early in the morning set out for half day guided hiking at Periyar National Park and boat safari at Periyar Lake. This activity takes close to 6 hrs. The wildlife sanctuary is also famous for its tiger reserve and elephant reserve. Visiting the sanctuary will be like exploring the nature around, enjoying the pristine and peaceful atmosphere around and getting relaxed from your busy schedules. There are bright chances to spot the elephant herd in the jungle while you are hiking. Reach back to hotel by noon. Check-out from hotel & head towards Kollam, the southern approach to Keralas backwaters, surrounded by the calm waterways of Ashtamudi Lake, fringed with coconut palms, cashew plantations and traditional villages a great place to get a feel for the backwaters without the crowds.
Reach Kollam by evening. Check-in at the hotel on arrival. Overnight stay at the hotel in Kollam.
Duration: 6 hours

Stop At: Varkala Beach, Varkala, Thiruvananthapuram District, Kerala
After breakfast head out for sightseeing tour to Varkala Beach. Varkala is an amazing place where you see sea coast along with cliffs. There are numerous water spouts and spas on the sides of these cliffs. Varkala Beach is a haven for sun-bathing and swimming.
In the afternoon reach back Kollam and enjoy a boat ride from the resort jetty. This boat ride will take you through the mangrove and backwaters. Evening at your leisure. Overnight stay at the hotel in Kollam.
Duration: 3 hours

Pass By: Alleppey Backwaters, Alappuzha, Alappuzha District, Kerala
After breakfast check-out from hotel & head towards Alleppey (a.k.a. Alappuzha). Welcome to the Venice of the East Alleppey, world famous for its vast mesmerizing backwaters. This charming place is the hub of Keralas backwaters and is home to a huge network of backwaters and more than thousand houseboats
Reach Alleppey by noon. Check-in at a private AC houseboat. Have lunch on the houseboat. Enjoy a boat cruise through the magnificent Vembanad lake for an unforgettable experience of backwater cruising. Dinner & overnight stay at the houseboat in Alleppey.

Pass By: Cochin International Airport
After breakfast, check out from the houseboat and head towards Kochi Airport. Private car will drop you at airport by noon.
Bid farewell with the memories of amazing fun-filled 07 days trip through the Gods own country Kerala, worth remembering for the lifetime!

Transfers and sightseeing as per itinerary in a private car with driver (at your disposal).

Food and drinks, unless specified.

Anything not mentioned in the Inclusions.

Children below 5 years old are complementary (sharing the same bed)