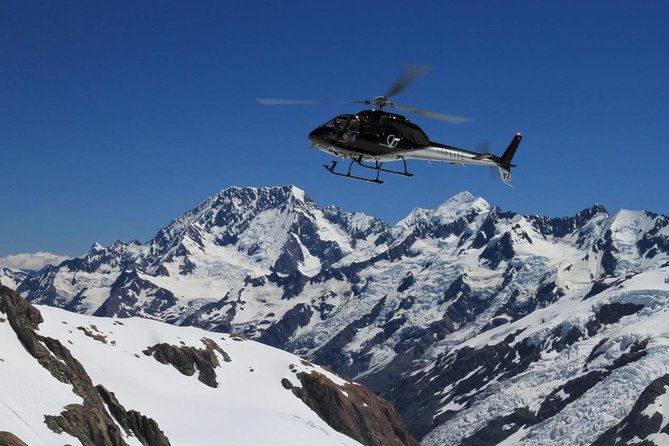 Soar through the sky on this 55-minute scenic Helicopter experience through the Mt Cook and Westland National Parks flying over the Fox, Franz Josef and Tasman Glacier, included a glacier landing (10-15 minutes). The ultimate way to see the Southern Alps and a bucket list flight.

Check in closes 45 minutes prior to the flight time.

The ultimate way to see the Southern Alps. Traverse the Main Divide to the West Coast and view the breath-taking landscape of the Fox and Franz Josef Glaciers. Track north along the Tasman Sea before recrossing the snow-capped peaks of the Southern Alps to the Tasman Glacier. Enjoy the stunning views of the Mt Cook National Park as you track south down the Tasman. Fly through the Grand Plateau and the Hochstetter Icefall as you pass under the east face of Aoraki Mt Cook before descending over the Tasman Terminal Lake.

Key highlights include beautiful views right from take-off, a glacier snow landing, views of Mt Cook, Mt Tasman and Mt Sefton, stunning views of the West Coast of New Zealand, hochstetter Icefall, Grand Plateau and Plateau Hut, Snow/ice all year round, and the aircraft will completely shut down on landing, really giving you a chance to soak in the atmosphere.

With hotel pickup and drop-off included, leave your worries behind you to enjoy an amazing Southern Alps helicopter experience.

Flights may be cancelled due to weather conditions

Departure time will vary daily depending on bookings and weather conditions

Check in closes 45 minutes prior to flight time