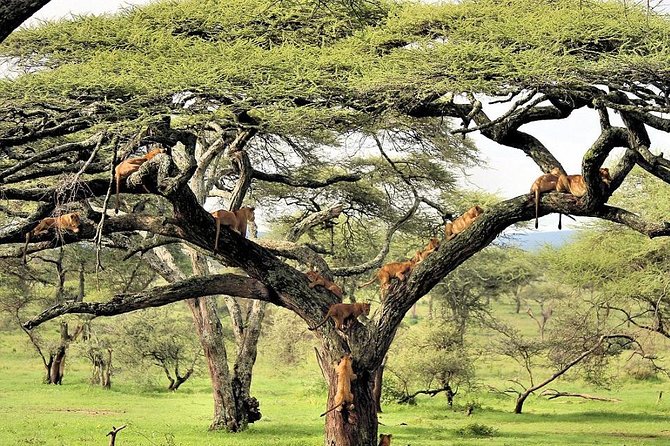 This safari is a 6 days, 5 night luxury guided Lodge safari to the top game-viewing areas ofTanzania: Lake Manyara, Ngorongoro conservation area, Serengeti national park and Tarangire national park. The wildlife concentrations and diversity here are unsurpassed and youll be able to view them from the comfort of your 44 Landcruiser, in the company of an experienced safari driver / guide. Accommodation in a Luxury Lodges on Full Board.I deal Safari for Honeymooners, Family, Couples and Singles.

Day 1
The Safari start by picking you from your Arusha Hotel 8:00AM driving124 km arriving at our first parkTarangire National ParkWe take you on your first Game Drive arriving back just before dusk to overnight Tarangire Sopa Lodge

Day 2
Rising early we game drive, after which we continue our safari toLake Manyara National Park.We shall Game Drive in this spectacular park at the base of the western wall of the Great Rift Valley before retiring to our lodge on the rim of the Rift Valley. Overnight Serena Lake Manyara BLD

Day 3
We drive to and enter the world famousSerengeti national parkSerengeti National Park.Game Driving from the entrance gate to your hotel in this the probably most famous of all National Parks in the world! Overnight inSerengetiSopa lodge/ Serena LodgeBLD.

Day 4
A full day, dawn to dusk Game Driving in theSerengeti National Park.Today we explorethe ever changing flora and fauna, in this park made famous in the Film Serengeti shall not die by Dr. Bernhard Grzimek. You too shall never forget the splendor of the rolling Savannah and open plains, home to the most spectacular migration on our planet! Overnight inOvernight inSerengetiSopa lodge/ Serena LodgeBLD.

Day 5
Our last game drive inSerengeti National Parktaking in some of the Kopjes / Inselbergen granite outcrops in which many predators love to sit and look out over the plains for their prey. Lunch is a packed lunch. En-Route toNgorongoro Crater:. Overnight. NgorongoroSopa Lodge/Serena LodgeBLD