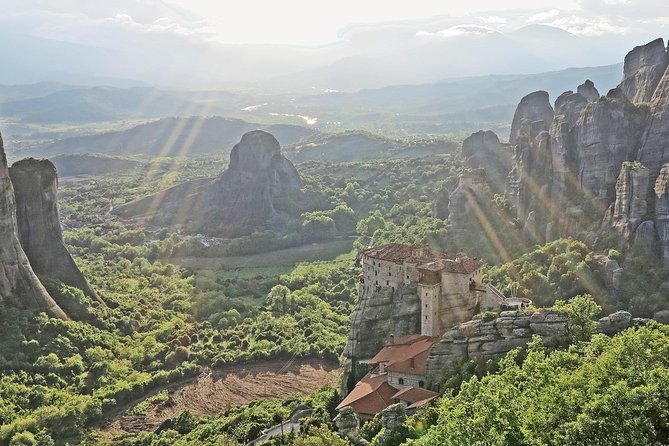 Take a seven-day tour of the essential sites of classical Greece: Olympia, Delphi, Meteora, Thessaloniki and Lefkadia. You'll visit famous archaeological sites and museums, and experience the glory that was classical Greece.

Pass By: Palamidi Castle, Nafplio, Argolis Region, Peloponnese
Stop at picturesque Naufplion and admire the Castle of Palamidi on the top of the city

Day 1: Epidaurus - Mycenae - Olympia (D)
Your first stop is at Corinth Canal. Drive to Epidaurus for a visit of the archaeological site and the theater famous for its remarkable acoustics, and then on to Nauplia for a short stop. Drive to Mycenae where you visit the archaeological site, then depart for Olympia, through the central Peloponnese area passing the cities of Megalopolis and Tripolis.

Day 2: Olympia - Nafpaktos - Delphi (B, D)
In the morning visit the archaeological site and the museum of Olympia. Drive via Patras to Rion, cross the channel to Antirion on the "state of the art" new suspended bridge considered to be the longest and most modern in Europe. Arrive in Nafpaktos, then continue to Delphi for the evening.

Day 3: Delphi (B, D)
In the morning visit the archaeological site and the museum of Delphi. The rest of the day at leisure.

Day 4: Kalambaka - Meteora (B, D)
In the morning, start the drive by the central Greece towns of Amphissa, Lamia and Trikala to Kalambaka. Afternoon visit of the breathtaking Meteora. Dinner and your overnight accommodation is in Kalambaka.

Day 5: Dion - Thessaloniki (B, D)
Drive by Trikala and Larissa to the famous, sacred Macedonian town of Dion. Then, continue to Thessaloniki, the largest town in Northern Greece. Visit the most interesting museum of Thessaloniki and sightseeing of the city.

Day 6: Pella - Vergina - Lefkadia (B, D)
Morning drive to Pella, Alexander the Great's capital. Continue to Vergina to visit the Tomb of the King Philip and the famous "Vergina Treasures". Then on to Lefkadia where you visit the excavations. Return to Thessaloniki via Veria.

Day 7: Tempi Valley - Thermoplyae - Athens (B)
Start the return drive to Athens, through the Tempi Valley, Larissa, Lamia, Thermoplyae famous for the ancient battle that took place there and Kamena Vourla.

Free Wifi in the Amalia hotels

Entry/Admission - The Great Theatre of Epidaurus

Entry/Admission - Museum of the Royal Tombs of Aigai (Vergina)