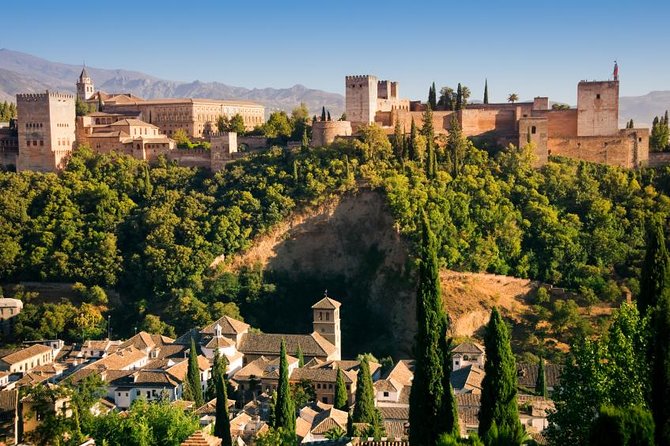 This seven-day tour highlights Andalusias Moorish heritage and visits the Andalusian cities of Cordoba, Seville and Granada, plus the cathedral city of Toledo. Youll spend two days exploring Madrid at your own pace, then travel to Andalusia and Toledo to discover the history and culture of southern Spain. Granadas Alhambra and Generalife Gardens are just some of the many UNESCO World Heritage Sites youll visit in this legendary region of Spain. Choose from three-star or four-star hotel accommodation for all six nights.

Your seven-day Spain tour starts with two nights in Madrid, where youll have free time and see its top sights on a panoramic tour. Then travel through legendary Don Quixote countryside to take in Cordobas multicultural mix of Jewish and Arab backgrounds and medieval architecture.

Your last stop for the day is Seville on the Guadalquivir River, home to the eponymous cathedral, Maria Luisa Gardens and colorful Santa Cruz quarter. Spend two nights in Seville, then continue to Granada, renowned for the amazing Arab architecture of the Alhambra, the last stronghold of the Moorish kingdoms and one of Andalucia's special highlights.

Following a night in Granada, your last stop is Toledo for a tour of the citys World Heritage-listed Old Town before returning to Madrid for the night. The next day, your tour concludes with a transfer to the Madrid Airport.

To customize your trip, you can opt to begin the tour a day later and enjoy your free day in Madrid on Day 7 instead of Day 1. If you are not arriving or departing at the Madrid Airport on Day 1 and/or Day 7, you can be picked up and/or dropped off at the central Madrid location of your choice.

Day 1: Madrid
After being greeted at the Madrid airport, you will be transferred to your hotel for your overnight accommodation in Madrid. The day and night are free for you to discover the city on your own.

Day 2: Madrid (B)
After breakfast at your hotel, board your deluxe air-conditioned coach for a panoramic sightseeing tour of Madrid and have free time to spend the afternoon exploring Madrid’s monuments, boulevards and squares at your own pace.Return to your hotel to spend the evening at your leisure.

Please note for tours operating in French: You will spend the day with an unlimited hop-on hop-off pass, instead. Travel along the route of your choice or change to another, admiring the architectural and cultural magnificence of Madrid, with commentary offered through a headphones audio system in fourteen different languages. You will be given a map of the city and discount checks for different shops and restaurants in the city. The operational frequency, depending on the season of the year, ranges approximately between 7 and 15 minutes, depending on the season. Route 1 takes about 80 min and stops at highlights including the Museo del Prado and Palacio Real. Route 2 lasts about 65 minutes and stops at Plaza Neptuno, Museo Esculturas, and more.

Day 3: Madrid - Cordoba - Seville (B, D)
After breakfast, board your luxury coach to drive through the legendary land of La Mancha to Cordoba. After enjoying lunch (own expense) and a guided city tour revealing Cordoba’s mix of Jewish and Arab culture, medieval courtyards and winding alleys, continue to Seville for dinner and your accommodation.

Day 4: Seville (B, D)
Breakfast is followed by a tour of Seville’s monuments and panoramic views, featuring an external visit of Seville Cathedral, the Santa Cruz quarter and Maria Luisa Gardens. Spend the afternoon exploring Seville at your leisure, before returning to your hotel for dinner and an optional flamenco tour (additional expense, payable at time of tour).

Day 5: Seville - Granada (B, D)
After breakfast, return to your coach to drive to the legendary city of Granada, traveling via the Caliphate road. A guided tour of the World Heritage-listed Alhambra and Generalife Gardens reveals the culture and history of Spain’s Moorish rulers and their exotic architectural legacy. After dinner you have the option of joining a Gypsy night tour (own expense) before returning to your hotel.

Day 6: Granada - Toledo - Madrid (B)
Following breakfast, travel to the UNESCO World Heritage city of Toledo, where the city’s Christian, Jewish and Moorish cultures are evident at every turn during your tour of the winding backstreets of its cobblestone Old Town. Return to your coach to travel to Madrid, where you’ll stay overnight.

Day 7: Madrid (B)
After breakfast at your hotel, you’ll be transferred to the airport for the conclusion of your seven-day excursion through Spain.

Guided visits as per itinerary

Children aged 3 years and under are free of charge, providing they do not occupy a seat on the bus. Please note, any expenses incurred at the hotel e.g. cot or meals) should be paid directly to the hotel