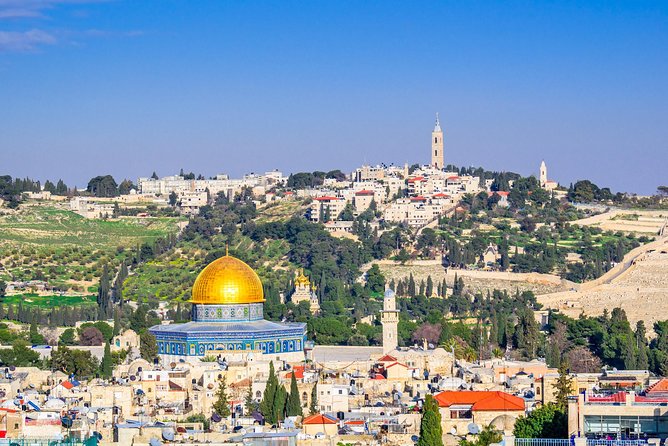 Journey through Israels holy and historical highlights on this 7-night tour from Jerusalem, with accommodation, transport and select meals included. Explore the spiritual sites of Old and New Jerusalem, follow the miracle trail around the Sea of Galilee, visit holy Bethlehem and Nazareth, and explore the Golan Heights, Haifa and ancient ruins at Caesarea and Beit She'an. Finish with a free day in Tel aviv or an optional day trip to the Dead Sea to float in its waters (additional cost). Airport pickup and drop-offs are included either side of your tour.

Your 7-night tour takes you deep into the historical and holy heartlands of Israel. Stay seven nights in a choice of 3-, 4- or 5-star accommodation to suit your budget, with your first three nights in Jerusalem, two at a traditional kibbutz hotel in Galilee, and the final two in Tel Aviv.
Breakfast and dinner are included each day (not including Day 1), and youll enjoy guided walking tours or orientation coach tours of each of the key sites you visit.

Day 1: Ben Gurion International Airport, Tel Aviv
Start your tour with an airport transfer to your Jerusalem hotel. Check in and enjoy some free time, perhaps enjoying dinner at one of Jerusalem’s many restaurants (own expense).
Overnight: 3-star Gate or Rimonim hotel, 4-star Grand Court or Leonardo hotel, or 5-star Crowne Plaza Dix or Dan Panorama hotel in Jerusalem

Day 2: Jerusalem (B, D)
After breakfast, board your air-conditioned coach for your day-long tour of Jerusalem, taking in the highlights of the New and Old City.
Start by admiring the skyline of Old Jerusalem from the Mount of Olives, and pass the Garden of Gethsemane, where Jesus was arrested after the Last Supper, on route to the Church of All Nations. Visit this mosaic-coated church, which houses the ‘Rock of Agony,’ a slab of rock where Jesus prayed before his arrest.
Next, visit the acclaimed Israel Museum, home of some of the Dead Sea Scrolls. Head inside the Shrine of the Book to see fragments of these Old Testament texts, the oldest ever discovered, and learn how they were preserved inside clay pots hidden in caves near the Dead Sea.
While here, view the museum’s Model of Ancient Jerusalem. This scale replica depicts the city in the Late Second Temple era and offers a richly detailed representation of still-identifiable streets and buildings.
After, visit Yad Vashem, the museum that honors the victims of the Holocaust. Finish with a journey through Ein Karem, the picturesque village that was the birthplace of St John the Baptist. If time permits, enjoy a brief visit to Jerusalem's bustling Mahane Yehuda Market before returning to your hotel and enjoying the evening at your leisure.
Overnight: 3-star Gate or Rimonim hotel, 4-star Grand Court or Leonardo hotel, or 5-star Crowne Plaza Dix or Dan Panorama hotel in Jerusalem

Day 3 Jerusalem – Bethlehem - Jerusalem (B, D)
After breakfast, enter a gate into walled Old Jerusalem, passing through the restored Jewish quarter to the Western Wall or ‘wailing wall,’ once part of the Temple Mount. See devotees pushing prayer notes into the wall, and then weave through bustling bazaars to the Via Dolorosa.
Retrace the footsteps of the cross-bearing Jesus as he made his torturous way to his crucifixion at Calvary. See some of the Stations of the Cross and head inside the Church of the Holy Sepulchre that stands on the crucifixion site.
Next, leave the walled city and head to Mt Zion. Here, see Dormition Abbey, where the Virgin Mary is said to have died, and visit the Room of the Last Supper and Tomb of King David.
Continue to Bethlehem, believed to be the birthplace of Jesus, and visit the Church of the Nativity on Manger Square. Marvel at its interior and descend into its Grotto to see the star marking the site of Jesus’ birth. Before returning to Jerusalem, stop at Shepherds’ Fields, the site where an angel proclaimed the birth of Jesus to shepherds. Gaze at the fields and church that stands here before returning to your hotel.
Overnight: 3-star Gate or Rimonim hotel, 4-star Grand Court or Leonardo hotel, or 5-star Crowne Plaza Dix or Dan Panorama hotel in Jerusalem

Day 4 Jerusalem – Nazareth – Upper Galilee (B, D)
Check out after breakfast and travel past the ancient Old Testament city of Jericho, and through the Jordan Valley to your first stop: Beit She'an.
Visit Beit She'an National Park, home to the well-preserved ruins of a Roman-Byzantine city. See the colonnaded streets, bathhouse and amphitheater as your guide casts a fascinating light on this once prosperous trading city.
After, head to Nazareth, Jesus’ childhood home, and visit the Church of the Annunciation and Mary’s Well, a modern version of an ancient well that was most likely used by Mary. Continue to Safed, the hub of the Kabbalah religion. Ascend the hills of Upper Galilee and stroll around its cobbled and colorful artists’ quarter, picturesquely set on a hilltop. Finish with a journey to your kibbutz hotel in the Galilee region, and enjoy dinner here this evening.
Overnight: 3-star Kibbutz Kfar Giladi, 4-star Kibbutz Kfar Giladi, or 5-star Kibbutz Kfar Giladi Boutique in Galilee region

Day 5 Upper Galilee – Golan Heights – Tiberias – Sea of Galilee – Upper Galilee (B, D)
Depart after breakfast for the Golan Heights, a mountainous area of nature reserves, springs and ancient ruins. See the Syrian military fortifications from the 1967 Six-Day War, and drive through Golan’s Druze villages before stopping for photos at the springs at Banias.
Travel on to the Sea of Galilee and ancient fishing village of Capernaum. Scout around its crumbled 2nd-century synagogue where Jesus may have preached, and see the church said to stand on the site of St Peter’s house.
Drive to Tabgha, where the Miracle of the Loaves and Fishes took place, and then visit the Mount of Beatitudes. Absorb the stunning vistas of the Sea of Galilee from the hill as you hear how Jesus is said to have delivered a deeply moving sermon on the very ground you're standing on.
A brief coach tour of Tiberias on the banks of Galilee ends your tour before you return to your hotel.
Overnight: 3-star Kibbutz Kfar Giladi, 4-star Kibbutz Kfar Giladi, or 5-star Kibbutz Kfar Giladi Boutique in Galilee region

Day 6: Upper Galilee – Acre – Haifa - Caesarea – Tel Aviv (B, D)
After breakfast, check out of your kibbutz and visit the UNESCO-listed, 5,000-year-old city of Acre. Enjoy a short walk around its ruined Crusader fortress and hear from your guide how Richard the Lionheart captured the city in 1191.

Continue to Haifa, Israel’s third-largest city, and see its striking Bahá'í shrine and Persian Gardens before climbing up Mt Carmel to take in panoramic views of the city and the Mediterranean.
Your next stop is Caesarea, where a ruined, 2,000-year-old city built by Herod the Great lies within an archaeological park. Hear how the city served as Rome's capital in Judea, and imagine life here long ago as you wander around the amphitheater and Crusader fortifications.
After, drive to Tel Aviv and old Jaffa, once one of the Mediterranean’s most important ports. Take a brief walking tour of its stone streets and artists’ quarter before returning to your hotel for dinner.
Overnight: 3-star Seanet or Gilgal hotel, 4-star Metropolitan or Grand Beach hotel, or 5-star Crowne Plaza or Dan Panorama hotel in Tel Aviv

Day 7: Tel Aviv or Optional Day Trip to Dead Sea (B, D)
After breakfast, make the most of a free day in Tel Aviv to relax at your hotel or explore. Alternatively, enjoy an optional day trip to Masada and the Dead Sea, traveling by coach through the Judean Desert to this vast inland sea that sits at the lowest point on Earth.
After roughly two hours, arrive at your first stop: Masada. This rugged mountain is crowned an ancient fortress of King Herod, and was the last stronghold of the Jewish Zealots against Roman forces in 73 AD. Ride the cable car to the top, and tour the ruins as your guide tells how the zealots ended the siege by committing mass suicide.
Descend by cable car and visit a spa resort beside the Dead Sea. Enjoy time at leisure to relax on the beach, float in the salt-heavy waters, and perhaps loll in the warm sulphur pools or nutrient-rich mud. Later, meet back at the coach and return to Tel Aviv in time for dinner.
Overnight: 3-star Seanet or Gilgal hotel, 4-star Metropolitan or Grand Beach hotel, or 5-star Crowne Plaza or Dan Panorama hotel in Tel Aviv

Day 8: Tel Aviv - Ben Gurion International Airport, Tel Aviv (B)
After breakfast, transfer to the airport for your flight departure.

Please note: be sure to provide the required passport information and flight details within the correct fields when booking