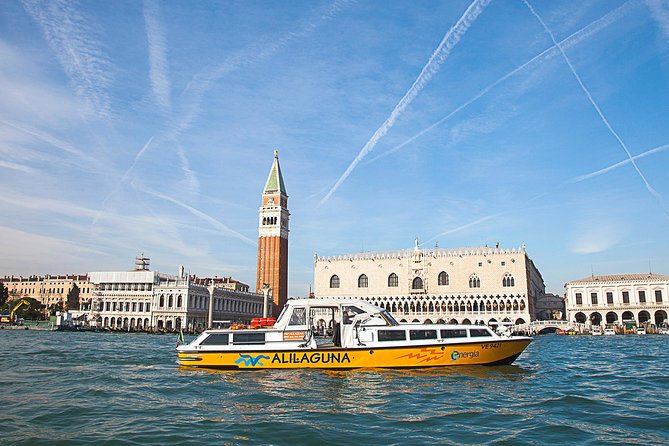 Enjoy a 72-hour Venice transport pass which give you access to all Alilaguna boat transfers. Alilaguna 3 boat transfers lines connect Venice Marco polo airport and Venice Cruise Terminal to many stops in Venice city centre, the Lido and Murano island, giving you the possibility to navigate through the city in a fast and easy way.
All available stops are listed in the itinerary section, tickets are valid for 72-hour on all 3 Alilaguna Lines from time of voucher exchange.

Exchange your voucher with a regular ticket at any of the Alilaguna Ticket Offices to activate your 72 hours ticket.

The Alilaguna pass is valid on all 3 Alilaguna lines (blue, orange and red) which connect Venice marco polo airport and Venice Cruise Terminal to Venice city centre, the Lido and Murano island. For the full stops list, please check the itinerary section.

To ensure a safe embarkation all stops are equipped with floating pontoons connected to the land with ramps. Passenger can exchange the voucher at any Alilaguna ticketing offices, which are located at Marco polo airport (arrival hall and airport dockyard), Cruise Terminal, Tronchetto (car park), San Marco square and Rialto (San Luca square).

Click on 'view additional info' to see the Lines map.