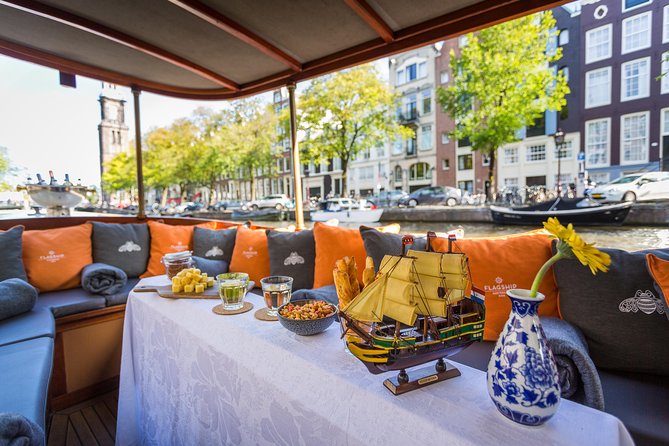 On our 75 min all-in dutch experience cruise, you will explore the city, its famous landmarks, culture, and rich trading history whilst relaxing on our covered and heated saloon boat. During the cruise, our skipper will take you through many highlights our city has to offer and our hostess will provide you with drinks and typical dutch snacks. The cruise will be done with a small group of people, so expect an interactive tour, with enough space for questions and any needed recommendations for your further stay in Amsterdam. The departure point is Prinsengracht 323 in front of Pulitzer amsterdam.

Pass By: Rijksmuseum, Museumstraat 1, 1071 XX Amsterdam The Netherlands
The Rijksmuseum was founded in The Hague in 1800 and moved to Amsterdam in 1808, where it was first located in the Royal Palace and later in the Trippenhuis. The current main building was designed by Pierre Cuypers and first opened in 1885.On 13 April 2013, after a ten-year renovation which cost 375 million, the main building was reopened by Queen Beatrix. In 2013 and 2014, it was the most visited museum in the Netherlands with record numbers of 2.2 million and 2.47 million visitors. It is also the largest art museum in the country. Our boats will sail along the Prinsengracht with a view on the Rijksmuseum
The museum has on display 8,000 objects of art and history, from their total collection of 1 million objects from the years 12002000, among which are some masterpieces by Rembrandt, Frans Hals, and Johannes Vermeer. The museum also has a small Asian collection, which is on display in the Asian pavilion.

Pass By: Spiegelkwartier, Amsterdam The Netherlands
The imposing Rijksmuseum can be seen from the Spiegelgracht. This canal connects the Prinsengracht with the Lijnbaansgracht and runs into the Nieuwe Spiegelstraat. The Spiegelgracht is part of the Spiegelkwartier which is characterized by its many galleries and antique shops. As an art lover, you can walk from the Museumplein along the Spiegelgracht where you can continue to enjoy the most special paintings, antiques, and art (objects).
Pass By: De Duif, Prinsengracht 754, 1017 LD Amsterdam The Netherlands
The present church owes its name to a predecessor, the 17th-century hiding church 'Het Vrededuifje' that once stood on the Kerkstraat. The first stone for the current Duifkerk, designed by Leiden architect Th. Molkenboer was laid in April 1857.
Due to a lack of money, the church became increasingly decayed in the course of the 20th century. For more than twenty-five years the building has been packed because the monumental faade had become detached. This danger has since disappeared. De Duif reopened in 2002 after an intensive restoration. During that restoration, the original murals were reappeared under layers of wall paint.

Pass By: Museum Ons'Lieve Heer Op Solder, Oudezijds Voorburgwal 38, 1012 GD Amsterdam The Netherlands
Tucked away in the heart of Amsterdams inner city lies a small marvel: Our Lord in the Attic Museum: a uniquely preserved seventeenth-century house from the Dutch Golden Age. Explore the narrow corridors and climb the stairs to historically furnished living rooms, kitchens, and bedsteads, leading literally to the highpoint of the museum: an entire church in the attic.
Pass By: Noordermarkt, Noorderkerk, Amsterdam The Netherlands
Amsterdam is THE market city of Holland. Below the Noorderkerk', on one of the citys most beautiful squares, the Noordermarkt takes place on Mondays and Saturdays. This market has a tradition that originated in the seventeenth century. Through the ages, this market has been organized, daily, weekly and annually.
Pass By: Micropia, Artisplein Plantage Kerklaan 3638, 1018 CZ Amsterdam The Netherlands
Museum of microbes
The only museum of microbes, in the center of Amsterdam.

Pass By: Haarlemmerstraat, Amsterdam The Netherlands
Located in Amsterdams Jordaan district, the Haarlemmerstraat and its extension, the Haarlemmerdijk - is a gem. Offering independent boutiques and specialty stores, little salons, trendy but affordable restaurants, and bars and the oldest cinema in Amsterdam, this area will appeal to even the most jaded of world travelers. You are guaranteed to find a special little something from Amsterdam in this alternative shopping district. And with a constant passing parade along the Haarlemmerstraat, you can spend a very entertaining time just watching the world go by.
Pass By: Statue of Anne Frank, Prinsengracht 281, Amsterdam The Netherlands
Anne Frank is one of Amsterdams best-known historical figures. Anne and her family lived in hiding from the Nazis for more than two years in a house on the Prinsengracht. Anne was eventually deported to the Bergen-Belsen concentration camp in 1945, where she later died at the young age of 15. Today, Annes spirit lives on through her diary and the huge numbers of visitors who come to Amsterdam every year to learn more about her short life.
Pass By: Magere Brug, Kerkstraat Nieuwe Kerkstraat, Amsterdam The Netherlands
One of Amsterdams many bridges is the beautiful Magere Brug, known to English speakers at the Skinny Bridge. This wooden drawbridge was once so narrow that it was hard for two pedestrians to pass each other. To cope with increasing traffic on the Amstel, a wider bridge replaced the narrow original in 1871.
Pass By: Museum Het Rembrandthuis (Rembrandt House), Jodenbreestraat 4, 1011 NK Amsterdam The Netherlands
The Rembrandt House Museum tells the story of the multi-faceted Rembrandt. He is known above all as an artist, the maker of dozens of self-portraits, intriguing cronies, compelling history paintings and convincing portraits. But Rembrandt was much more than a talented painter, etcher, and draughtsman. In the museum, you will encounter Rembrandt the man, the teacher, the collector, the entrepreneur and the Amsterdammer. Come and meet him in his own home!
Pass By: Het Scheepvaartmuseum| The National Maritime Museum, Kattenburgerplein 1, 1018 KK Amsterdam The Netherlands
The collection of The National Maritime Museum is one of the largest and most prominent maritime collections in the world with approximately 400,000 objects, including paintings, ship models, navigation instruments and world maps. Discover 500 years of Dutch maritime history and how strongly this is connected to the society of today and of the future.
Pass By: Red Light District, Amsterdam The Netherlands
It is very likely that you have heard about this neighborhood and to be frank, everything you have heard is probably true. From brothels to sex shops to museums, the Amsterdam Red Light District has it all. But contrary to what a lot of people might think, the Amsterdam Red Light District has a very friendly atmosphere and isn't as dangerous as it used to be.
Pass By: Dutch National Opera & Ballet, Amstel 3, 1011 PN Amsterdam The Netherlands
Dutch National Ballet develops, produces and presents ballet at the highest international level. We aim to reach a wide public and to bring todays audiences into contact with the beauty and passion of this art form. Come in and be inspired by our spectacle we promise to give you a warm welcome.
Pass By: Begijnhof, Gedempte Begijnensloot, 1012 RM Amsterdam The Netherlands
The Beguinage and its chapel are open every day from 9.00 - 17.00. You can reach the chapel via the gate at the Spui.
The Beguinage is a private possession and is not a public ground. It is also a place of silence. We request you, as our guests, to respect this silence. Therefore, the Beguinage is closed for groups and excursions. Explanation about the Beguinage, if wanted, must be given out of the yard.

Pass By: Homomonument, Westermarkt, 1016 GW Amsterdam, Netherlands
The Homomonument is a memorial on the Westermarkt, located between the Westerkerk and the Keizersgracht in the center of Amsterdam. The monument was unveiled on 5 September 1987 and consists of three pink, granite triangles, arranged in such a way that together they form a large triangle.
Pass By: Sarphatipark, 1073 CZ Amsterdam The Netherlands
The Sarphatipark is a 4.5-hectare rectangular park in the middle of Amsterdam's De Pijp residential area in the Zuid district. The park was named in 1888 after the doctor, urban planner, and benefactor Samuel Sarphati
Pass By: Het Grachtenhuis, Herengracht 386, 1016 CJ Amsterdam, Netherlands
The Grachtenhuis is a museum on the Herengracht in Amsterdam dedicated to the 17th-century Amsterdam canals. The museum tells the history of the canal belt through an interactive and multimedia exhibition.
Pass By: Het Schip, Oostzaanstraat 45, 1013 WG Amsterdam, Netherlands
Museum Het Schip is a museum in Amsterdam-West, located in the block with the same name. The museum is dedicated to the Amsterdam School. The building is considered as a prominent example of this architectural style.
Pass By: Hollandsche Schouwburg, Plantage Middenlaan 24, 1018 DE Amsterdam The Netherlands
The Hollandsche Schouwburg is a Jewish monument on the Plantage Middenlaan in Amsterdam. Between 1893 and 1942 it was a theater. In the war years 1942 and 1943 it was a gathering place where Jews were deported via Camp Westerbork to Nazi Germany extermination camps.
Pass By: This is Holland, Overhoeksplein 51, 1031 KS Amsterdam, Netherlands
This is Holland is a tourist attraction with a panoramic flight simulator in Amsterdam. The attraction was opened in Amsterdam North in 2017, next to the EYE Film Museum, in a 24-meter-high cylindrical pavilion on the former Overhoeks Shell site, above the underground parking garage of the A'DAM Tower.
Pass By: Amsterdam Tulip Museum, Prinsengracht 116, 1015 EA Amsterdam The Netherlands
The Amsterdam Tulip Museum, also known as the Tulip Museum, is located at Prinsengracht 116, opposite the Anne Frank House. The museum shows the history of the tulip below, from its discovery in Central Asia to the present time.
Pass By: Pieter Cornelisz Hooftstraat, 1019 Amsterdam The Netherlands
The Pieter Cornelisz. Hooftstraat, usually P.C. Called Hooftstraat, is a street in Amsterdam. The street was named in 1872 after the historian, poet, and playwright Pieter Cornelisz. Hooft.
Pass By: Waterlooplein Market, Waterlooplein 2, 1011 NZ Amsterdam, Netherlands
Waterlooplein is the oldest flea market in the Netherlands. Founded one hundred and thirty-three years ago, open six days a week and with about three hundred stalls, one of the nicest and nicest places in the heart of Amsterdam. You can wander around, watch and tap on something fun. From vintage cameras to second-hand books, to jewelry and the latest fashion for little
Pass By: Erotic Museum, Oudezijdsachterburgwal 54, 1012 DP Amsterdam The Netherlands
Amsterdam is famous for its beautiful canals, historic buildings, misty coffee shops, beautiful museums, frank culture, and iconic Red Light District. This unique attraction is visited by millions of tourists every year, and the Erotic Museum is centrally located in this area.

Availability for shows cannot be checked without making a booking. Credit cards will only be charged upon confirmation of show availability

It is colder on the water, please bring warm clothing and don't get surprised by the chilly Dutch weather

A fairly big step has to be made into the boat. Our stewards will assist you with this.

You are always welcome to cancel your ticket if it rains and you'd rather stay inside :)

No boats at the dock? Please call us or visit our office at Leliegracht 50 (around the corner)

This tour/activity will have a maximum of 45 travelers