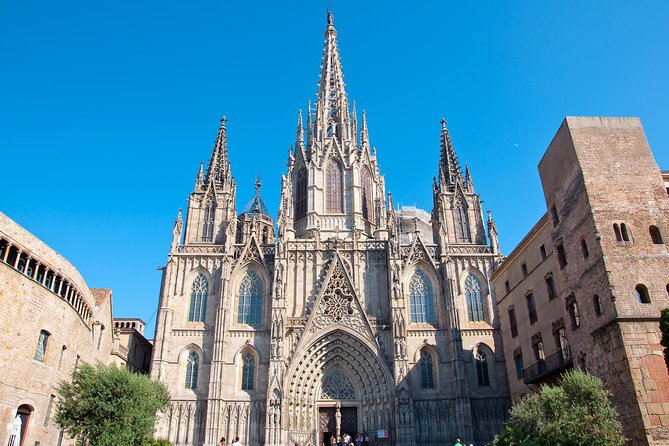 Discover beautiful Barcelona, UNESCO World Heritage-listed Toledo and the highlights of Spains Andalusia region on this 8-day tour. Spend two days exploring Barcelona at your own pace; then, ride a high-speed train to Madrid. Explore the cities of Seville, Cordoba and Granada, and visit the UNESCO World Heritage Site of Granadas Alhambra Palace and Generalife Gardens. Youll enjoy seven overnight stays in 3- or 4-star hotels as well as several guided tours and round-trip transportation by deluxe coach.

After pickup from the Barcelona airport, spend two days in Barcelona at your own pace tasting tapas in the citys Gothic quarter, and admiring Antoni Gaudis La Sagrada familia and Park Guell.

Then, ride the high-speed train to Madrid for a sightseeing tour and free time to explore on your own. Saunter down Gran Via with its shops and restaurants, see the La Cibeles statue, and explore Plaza de Espana. After your time in Madrid, travel through legendary Don Quixote country to Cordoba, where a city tour will reveal Cordobas medieval courtyards, winding alleys and Mix of Jewish and Arab cultures.

On the same day, continue to Seville, on the Guadalquivir River, where youll see Seville Cathedral, the Maria Luisa Gardens and the colorful Santa Cruz Quarter. Continue your journey to Granada, renowned for the amazing architecture of the UNESCO World Heritage-listed Alhambra Palace and its Generalife Gardens.

The last stop on your 8-day tour before returning to Madrid is Toledo, a UNESCO World Heritage City where Christian, Jewish and Moorish cultures combine.

Your tour includes round-trip transportation by deluxe coach, six nights of accommodation in 3- to 4-star hotels and guided visits to many attractions. Daily breakfasts and some dinners are included, and for lunch, your guide can recommend great places in the city for you to eat (own expense). For a detailed schedule of each day, see the Itinerary section below.

Day 1: Barcelona
When you arrive at the airport in Barcelona, your driver will assist you with your luggage and take you to your Barcelona hotel. Enjoy a relaxing overnight stay to gear up for your exciting journey through Spain!

Day 2: Barcelona (B)
Enjoy breakfast at your hotel, In the morning enjoy a highlights tour of the city with your guide and take the rest of the afternoon at your leisure Pass by Gaudi's most famous works like Sagrada Familia, Park Guell, La Pedrera and Casa Batllo.

Please note for tours operating in French: You will spend the day with an unlimited hop-on hop-off pass, instead. Travel along the route of your choice or change to another, admiring the architectural and cultural magnificence of Barcelona, with commentary offered through a headphones audio system in fourteen different languages. You will be given a map of the city and discount checks for different shops and restaurants in the city. The operational frequency, depending on the season of the year, ranges approximately between 7 and 15 minutes, depending on the season. Unforgettable way to get to know the city with a sightseeing tour, as well as from above with the Montjuic cable car, which offers incredible views, a visit to the renowned Poble Espanyol, and finally a chance to lose yourself in the streets of the Gothic Quarter with a pleasant stroll
In the evening, head back to your hotel.

Day 3: Barcelona – Madrid (B)
Breakfast at the hotel. Transfer to Sants train station to depart by AVE, high speed train, at 9am to Madrid. Enjoy the journey with the comfort and operating speed of this AVE train. Arrival at 11:45am. Transfer from the station to your hotel. Balance of the day at leisure.

In the evening, return to your hotel for a relaxing night’s rest.

Day 4: Madrid – Cordoba – Seville (B, D)
Start your day with breakfast before hopping on your air-conditioned coach for a drive through the land of Don Quixote, ‘The Man from La Mancha,’ to Cordoba. When you arrive, take a city tour with your guide to see the Cordoba Mosque and explore the historic Jewish Quarter.

Then, continue your journey to Seville, where you’ll enjoy dinner at your hotel and rest up for the next day.

Day 5: Seville (B, D)
Have breakfast at your hotel and then take a tour of Seville’s main attractions. Admire the beautiful exterior of Seville Cathedral and head to the Santa Cruz Quarter before exploring Maria Luisa Gardens.

In the afternoon, enjoy free time to wander through Seville’s quaint streets on your own. Your guide will be happy to point out great spots for you to enjoy great views of the cityscape.

Back at the hotel in the evening, enjoy dinner and continue the fun with an optional flamenco tour!

Day 6: Seville – Granada (B, D)
After breakfast, leave Seville and travel to Granada, where you’ll visit UNESCO World Heritage-listed Alhambra, an impressive 14th-century royal palace and fortress complex, and its Generalife Gardens, the last stronghold of the Moorish kingdom. Marvel at the palace’s amazing architecture and the garden landscape's natural beauty.

Head to your hotel for dinner and taken an optional gypsy tour before settling in for the night.

Day 7: Granada – Toledo – Madrid (B)
For your last day of sightseeing, start your morning with breakfast and then depart for the Imperial City of Toledo, a UNESCO World Heritage City with an interesting mix of three cultures: Christian, Moorish and Jewish.

Take a guided tour of the city’s quaint narrow streets to see important monuments and historical sites, and visit a local shop to see to various wares featuring damasquinado, a famous method of intricate gold and silver inlaying in iron.

Afterward, you’ll head to Madrid for your final overnight stay.

Day 8: Madrid (B)
After breakfast, reminisce on your incredible Spain experience on the ride back to the Madrid airport for your departure flight.

Guided visits as per itinerary

Children aged 3 years and under are free of charge, providing they do not occupy a seat on the bus. Please note, any expenses incurred at the hotel (cot, meals) should be paid directly to the hotel