8-Hour Private Tour Of The Pyramids, Sphinx, Egyptian Museum And Bazaar Including Camel Ride And Lunch From Cairo - With Reviews & Ratings

8-Hour Private Tour Of The Pyramids, Sphinx, Egyptian Museum And Bazaar Including Camel Ride And Lunch From Cairo 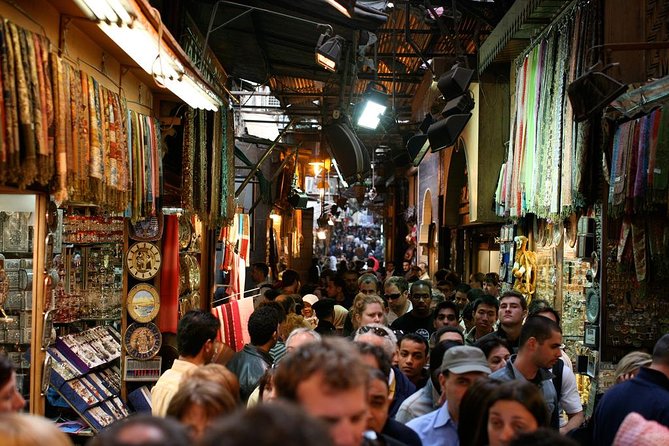 On this private tour several activities are involved and different periods of ancient history of Egypt covered as you will visit the Pyramids of giza, the Sphinx, The egyptian museum with its treasures, the oriental bazaar of Khan el Khalili. You will ride a camel for 30 minutes in the Sahara desert around the pyramids and you will have lunch in a local restaurant overlooking the pyramids.

After an 8am pick-up from your hotel, start your tour by visiting the plateau of Giza where you visit the Great Pyramid of Cheops and the pyramids of Chephren and Mycerinus. Take a few pictures from the panoramic area, before moving on to the Valley Temple and the Great Sphinx. Lastly, ride a camel for 30 minutes around the pyramids.

Next, you will have your lunch in a restaurant overlooking the Sphinx and the pyramids with set menu of grill chicken/kebab and kofta, before proceeding to The egyptian museum. Explore the animal mummy room, the mummy portraits, the Royal Mummy Rooms (extra fee), and King Tutankhamun's jewelry.

Afterwards, visit the famous Bazaar of Khan el Khalili to live the oriental atmosphere and the experience of bargaining. Your guide will drop you off at your hotel after the tour is finished.