A Day In Pamukkale And Aphrodisias Tour From Kusadasi

A Day In Pamukkale And Aphrodisias Tour From Kusadasi 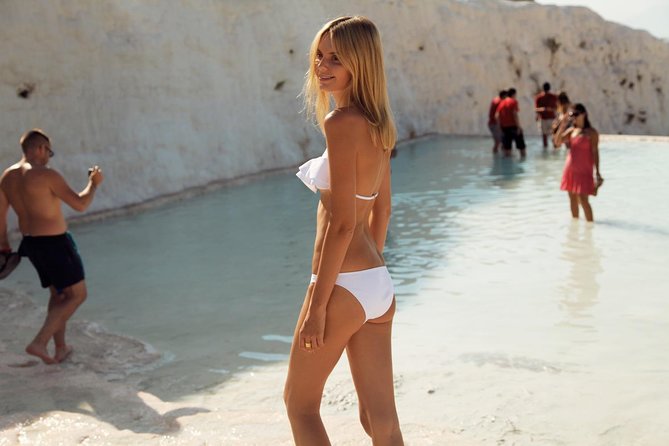 Our
A Day in Pamukkale and Aphrodisias Tour From Kusadasi brings history and the beauty of nature together in this one of a kind tour.

On this magnificent A Day in Pamukkale and Aphrodisias Tour From Kusadasi, get to experience the natural travertine terraces of the Pamukkale Koyu UNESCO World Heritage Site as well as the Hierapolis archaeological zone, an Ancient Roman resort city with the largest necropolis in Asia Minor.

The rock formations of Pamukkale (literally, "Cotton Castle") are a series of white terraces saturated with dissolved calcium bicarbonate, bubbling up from the feet of the mountains beyond. As the water flows over the edge of the plateau and cools, carbon dioxide is given off and calcium carbonate precipitates as hard chalk or travertine.

The spring emerges in the middle of the ancient resort city of Hierapolis (the ruins themselves are worthy of a stop as well). Sadly, the travertine that makes up the Pamukkale is gradually turning from white to yellow and is even thought to be drying up. Thirsty hotels are blamed by the government, which has demolished many of them.

This is good for the Pamukkale, but it makes finding a hotel increasingly difficult. Most stay in Pamukkale Koyu. The Hierapolis archaeological site lies west of Pamukkale Koyu. Its main features include a temple of Apollo and the adjacent Plutonium, a cavern emitting a deadly sulphur and carbon dioxide gas.

East of here is a restored Roman amphitheatre, dating from the second century AD. Most of the stage buildings and their elaborate reliefs remain intact. An interesting part of the city is the collonaded street, once extending almost 1km to a series of monumental portals. Today, only the most northerly, a triple arch flanked by towers and dedicated to Emperor Domitian in 84 AD, still stands.

Just south of the arch is the elaborate tomb of Flavius Zeuxis. This is only the first of more than a thousand tombs that constitute the full necropolis, the largest in Asia Minor.

Next  you will drive to the most exciting ancient site in the region,Aphrodisias is the City of Aphrodite, the Big stadium, Odeon, monumental gateway and the Temple of Aphrodite. It's the ruins at Ephesus that gets the most attention when it comes to this ancient site of Turkey. Aphrodisias has its own unique and magnificent parts of its own right. The site stretches out over a large area, exceptionally well preserved and restored, its very easy to lose yourself at the moment because it doesn't have the massive tourist crowds it probably deserves.Imagining life in the Aphrodisias times of old is not difficult.