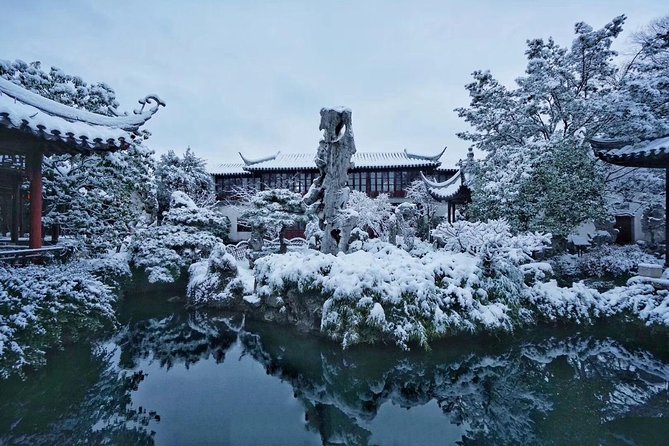 Suzhou is not only a famous cultural city and a city of gardens, but also the silk capital of China. With the assistance of professional guide from MoreFunAsia Suzhou Tours, we will walk into Suzhou. This tour offers a great chance to visit Suzhou silk museum, Suzhou's classical gardens, Shan Tang Street and Tiger hill. The original allure of these sites have been preserved, and they represent Suzhou's antiquity and appreciation for art.

Itinerary
This is a typical itinerary for this product
Stop At: Suzhou Silk Museum, No.2001 Renmin Road, Pingjiang District, Suzhou 215001 China
Your MoreFunAsia tour guide will be welcoming you at your hotel at 08:30 a.m. Then, we will transfer to Suzhou Silk Museum and start the one-day Suzhou tour.
Suzhou is the silk capital of China. We will visit Suzhou Silk Museum and learn about the history and culture of Chinese silk.
The entire museum design is dignified and elegant - yet unconventional - combining a sense of ancient civilization with modern style. It is divided into eight parts: the Introductory Hall, the Ancient Exhibit Hall, the Silkworm-Rearing Room, the Silk Weaving Workshop, the Vegetable Garden, the Central Hall, the Neoteric Exhibit Hall and the Modern Exhibit Hall.
Duration: 1 hour
Stop At: Tiger Hill, No.8 Huqiushan, Suzhou 215008 China
After visiting Suzhou Silk Museum, you will head over to Tiger Hill. Known also as Surging Sea Hill, covers over 14,100 square meters (over three acres) and is 36 meters (118 feet) in height. Climbing it, you will find a number of historical sites, some of which can be traced back over 2500 years ago, the founding year of Suzhou. Although the hill is relatively small, it has rich history.
There are thousands of magnificent bonsai trees on display in the Tiger Hill. Many of the specimens you can see have been recognized in prestigious bonsai competitions. The miniature replicas of full sized gardens will surely amaze you and will give an insight into the skill and the artistry of Chinese master gardeners that has been handed down long ago.
Duration: 1 hour 30 minutes
Stop At: The Lingering Garden, NO. 338 Liuyuan Road, Jinchang Dist, Suzhou 215008 China
After exploring Tiger Hill, the next stop of your trip is The Lingering Garden.
With a history of more than 400 years, the Lingering Garden has changed several times. Each owner did his best to perfect it. The garden was first built in 1593 during the Ming Dynasty (1368 - 1644) by a retired official named Xu Tai. During the Qing Dynasty (1644 - 1911), it was bought by Liu Shu. As a calligraphy lover, he carved masterpieces on both sides of the corridors of the buildings. Almost demolished in the 1930s, the garden was repaired by the government and then opened to the public.
Duration: 1 hour
Stop At: Shantang Street, Jinchang District, Suzhou 215008 China
This will be the last stop of the tour - Shantang Street. It is an ancient street with more than one thousand years history, lined with old buildings like memorial archways, ancestral temples, guild halls and modern buildings such as souvenir shops, tea houses and restaurants. The street reflects prosperity of both the present and the past Suzhou. Especially the southeast part of the street, also called old Shangtang Street, extends 360 meters (395 yards) long. There assembles various artifacts stores and local snacks. In addition, you can see a large ancient architectural complex, Yuhan Hall, which is the former residence of the official in Ming Dynasty (1644 - 1911).
Duration: 1 hour