A Walk Through The Heritage Of East India Company - Kolkata

A Walk Through The Heritage Of East India Company - Kolkata 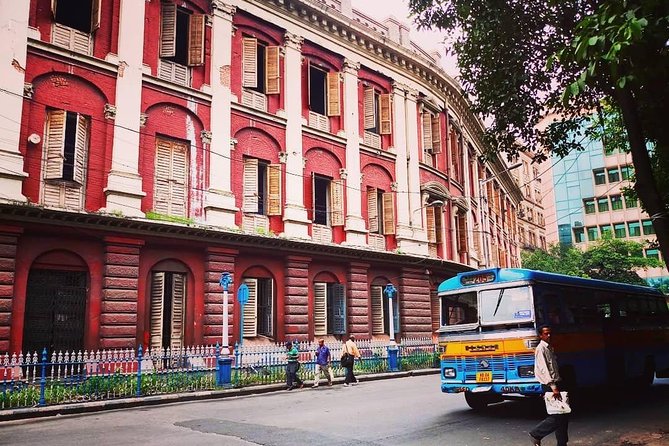 This experience is designed for exploring the 18th & 19th Centurys India when it was under East India Company a conglomerate backed by the British Empire. Back then Calcutta was a capital city and East India Company controlled most parts of the world through here. This tour gives an insight into important buildings and history of yesteryears.
The walk then starts at the site of the terrible 'Black Hole'. takes you past the famous Writer's Building, the former HQ of the infamous East India Company, around the square too, among others, the magnificent Governor's House, Calcutta High Court, Town hall, General Post Office and the almost forgotten Charnock Mausoleum. It is also a chance to experience a special side of the city as it is waking up in the morning with many interesting city characters to interact with along the way.

Itinerary
This is a typical itinerary for this product
Stop At: Malik Ghat Flower Market, Southeast end of Howrah Bridge, Kolkata (Calcutta) India
A 130 years old flower market is perhaps the biggest flower market in India attracting more than 2000 vendors in a day. There are porters, bearing baskets of flowers on their heads, some wear them on their shoulders, while the rest go the old-fashioned way, spread on the ground.
The market has an undying pleasant aroma filling the air and is fascinatingly colorful virtually 24 hours a day. It is a sight to watch so many people earning their livelihood and an equal number of people buying flowers.

Duration: 20 minutes
Stop At: B.B.D. Bagh, Kolkata, West Bengal, India
The former Dalhousie Square, now known as Benoy-Badal-Dinesh Bagh, is an oasis at the heart of modern Kolkata, formerly Calcutta, in eastern India. In the eighteenth and nineteenth centuries, Calcutta was the capital of British India and Dalhousie Square was the citys financial, social, and political nucleus.
Duration: 20 minutes
Stop At: Balck Hole of Kolkata, Netaji Subhas Rd, Fairley Place, B.B.D. Bagh, Kolkata, West Bengal 700001, India
The Black hole of the Fort William is infamous for the massacre of British Prisoners of war in 1756 when Siraj-ud-Daulah attacked the fort to stop East India Company from further fortification, many of the soldiers died, the remaining one was imprisoned in Blackhole out of 69 only 21 survived. Witness the horror story of the bygone years.
Duration: 5 minutes
Pass By: Raj Bhavan, Marx Engels Beethi Rd, Governors Camp, B.B.D. Bagh, Kolkata, West Bengal 700062, India
The Raj Bhavan was built at the behest of the Marquess of Wellesley (1760-1842), the future Duke of Wellington's elder brother. He had come to India in 1798 as Governor-General of Bengal for the East India Company., and had found the present rented accommodation unsuitable. The company's Civil Architect at that time was a colorful Italian, Edward Tiretta; but on this occasion, young Lieutenant Wyatt's plans won the day. As seen here, the main front with its elegant classical portico is approached by a grand set of stone steps. The central part then curves forward into sturdy three-story pavilions at each end.
Stop At: Calcutta High Court, B.B.D. Bagh, Kolkata, West Bengal 700001, India
The Calcutta High Court is the oldest High Court in India. The High Court building's design is based on the Cloth Hall, Ypres, in Belgium
Duration: 5 minutes
Stop At: General Post Office (GPO), Netaji Subhas Rd, Fairley Place, B.B.D. Bagh, Kolkata, West Bengal 700001, India
The GPO is notable for its imposing high domed roof (rising over 220 feet) and tall Ionic-Corinthian pillars. A Postal Museum that was built in 1884 displays a collection of artefacts and stamps. The staircase at the eastern side of the GPO features a brass plate, which marks the eastern end of the Old Fort William. This is probably the only remaining of the ancient fort of Calcutta. Recently a marble plaque has been installed on the Eastern walls of GPO, which highlight the Brass Plate.
Duration: 5 minutes
Stop At: , 2/2, Council House St, B.B.D. Bagh, Kolkata, West Bengal 700001, India
At the rear northwest corner of St John's Church grounds, there's a small gated cemetery partly paved with 18th-century grave stones. The centrepiece of this area is a hollow thick-walled octagonal cenotaph on whose inner wall you'll find the grave of Job Charnock, the (Western) 'founder' of Calcutta. Charnock died in 1693, just three years after his third visit to what would become Calcutta. The grave dates his demise to January 1692 (not 1693), as years were then considered to start in March.
Duration: 10 minutes
Stop At: St. John's Church, 2/2 Council House Street Opp Dewars Garage, Kolkata (Calcutta) 700001 India
The St. Johns Church is the third oldest church of Kolkata. It lists among the important heritage sites of Kolkata. An original Parish Church of Bengal, it became the principal Cathedral of Calcutta in 1815, and remained so until the consecration of St. Pauls Cathedral in 1847. The church is a rich repository of old memories and some historic monuments related to the history of Kolkata. Warren Hastings and Reverend William Johnson, Chaplain from 1770, were the prime movers for the construction of the church.
Duration: 15 minutes