Acropolis Of Athens And The Mythical Slopes

Acropolis Of Athens And The Mythical Slopes 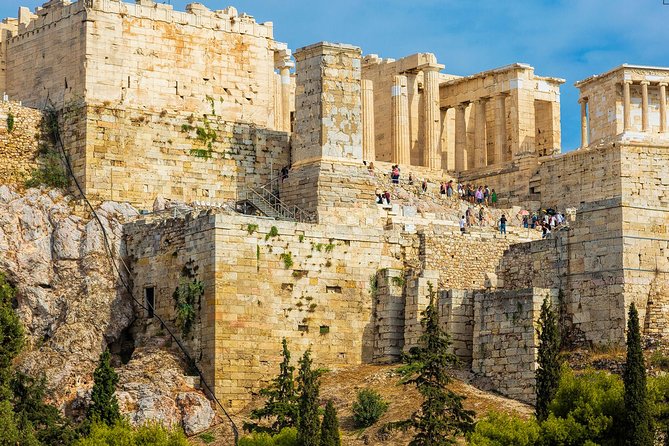 Discover Athenian Acropolis in its every aspect. Explore the theater and the temple of Dionysos, the place that it is told the theater was born.

Get lost around Acropolis slopes in order to meet the deities that Ancient Greeks believed that they were hidden in its caves.

Reach the hilltop of Acropolis were the Parthenon, the Erectheion and other significant monuments are still there, in order to reminds the glory of the 30years Periclian democracy regime. Learn about the hidden multitemporal and multicultural traces of the Greek Medieval period .

Our guides will lead you to a fascinating journey where the past and its myths take their place in our contemporary society in order to discover it and recreate it.

In every ancient Greek city The acropolis was a landmark of ritual to the deities of each city.

It is told that the Athenian Acropolis was dedicated to Athena, the goddess of wisdom from whom Athens took its name.

However, there is no hill without its slopes. Nowadays, the Parthenon stands on the Athenian Acropolis in order to remind us the glory of the 30 years regime of Periclian Democracy. Acropolis is a must see for every visitor of Athens. She stands in her beauty in the center of Athens capturing the locals and the visitors glances, inspiring people to visit her and get lost among her magnificent ruins. In this tour you will have the chance to wander to the hill of The acropolis in order to learn the history of Athens, of their people, their beliefs and their societies from the Prehistory to our Modern times.

When Acropolis hill was first inhabited? What about the relation of the myth with history and societies perceptions? Was anything up there before and after the construction of Parthenon? What about the uses of Acropolis during the Medieval era?

How the landscape of Athens was transformed through the recent history of the city after the creation of the Greek state? These questions and more will be answer by following the steps of our experienced guides. Discover the mythical caves on the slops, the myths for the ancient gods, mythical creatures and virgin princesses Admire Parthenon, Erechtheion and the Temple of athena nike recreate the life on the rock of Acropolis during ages Learn about Dionysus the god of fertile, wine and ecstasy and his role in Athenian life Discover the mythical fountain on the slop of Acropolis, admire the Ancient agora and the city from above.

Explore the hidden alleys in Plaka and discover the hidden island in the middle of Athens where the people live with their own simple way.

Food and drinks, other than the "value added offers" specified in your guidebook