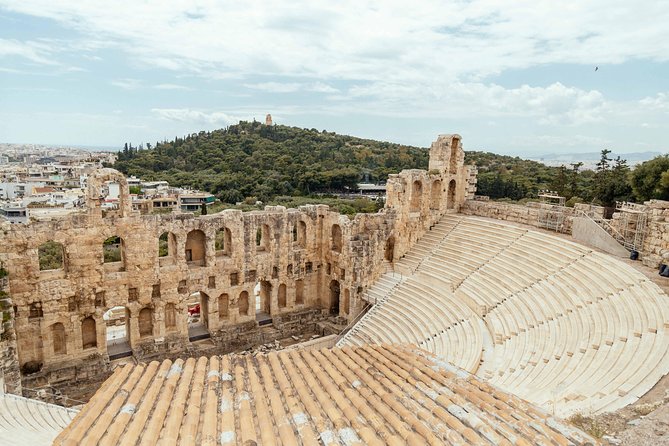 Get ready to stroll down the most beautiful streets of Athens and make your way to the architectural wonder of Ancient Greece - the UNESCO World Heritage-listed Acropolis of Athens. No need to wait in line, your professional tour guide will show you the way.

Explore the most famous symbol of Athens like youve never imagined. The best of Acropolis is waiting for you in this 100% private walking tour by your very own professional guide.

Kick-off your tour at one of the most famous meeting points in Athens: the Monastiraki square. Located right in the heart of the city center, youll find a unique blend of styles, eras and cultures. Lively and always dynamic all it takes is a 360 degree turn to see the very history of Athens surrounding you. Admire ancient landmarks, like The acropolis, the Temple of Zeus, the Roman agora, Ancient agora, the Evzones, and the 'Tomb of the unknown soldier.'

Stroll towards the archaeological site of the Hadrian's library, once an impressive construction of extraordinary richness. Walk towards the Gate of Athena and admire the Roman agora where you can see the use of the ruins through the ages. Reconstruct the past in the present, as you discover how thousands of years of history and different civilizations formed the life in Athens.

Head to the most famous building in the Roman agora: an eight-sided marble tower that is a combined water clock, sundial, and a weathervane. Continue wandering down hidden alleyways and discover Athens from an insiders perspective. You will gain an understanding of daily life in the city, where past and present still mingle.

Make your way towards Plaka, the most ancient part of the city. Check out some of the oldest taverns of Athens that have been meeting points for over two decades. Get ready to enter the tiny village of Anafiotika, a tranquil oasis isolated from Plakas buzz. Enjoy the cluster of small houses built on the slopes of the Acropolis. It's like being on a Greek Island.

Let your private guide show you iconic monuments that hold an even more impressive story. Stroll by one of the most picturesque Greek Orthodox churches of Athens, and youll understand why this is a local favorite for weddings, baptisms or relaxing walks.

Arrive at your final stop and enter the incredible Acropolis through the less touristy south slope. Whats even better is that theres no need to wait in line! Your private guide has already purchased your tickets in advance. Just pay your host directly.

This is the plan:

Have your very own professional tour guide

Admire the most beautiful ruins