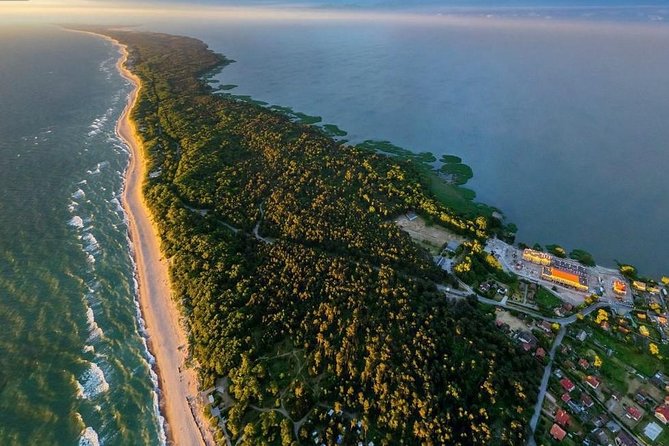 Itinerary
This is a typical itinerary for this product
Stop At: Curonian Spit, 98 Km peninsula Nationalpark KursiU Nerija Klaipda - Lesnoje, Kaliningrad 238535 Russia
The Curonian Spit is a narrow sand dune spit, which stretches along the Baltic Sea all the way from Kaliningrad in Russia to Lithuanias Klaipeda.
The striking biodiversity is presented on a narrow strip of land (3.8 kilometers in the widest place and only 400 meters in the narrowest spot), however, the spit is 98 kilometers long and just under half of it belongs to Russia. The remaining part of it belongs to Lithuania; this is shown by an outpost and state border markers.
Scientists have dubbed the Curonian Spit a museum of natural reserves because of the huge variety of its landscapes, which feature almost everything from birch groves to sand dunes. It is next to impossible to drive along the Curonian Spit without stopping every few hours or even for a couple of days to take in the ever-changing landscape including coniferous and lush green woods, countless colonies of birds and stunning sand dunes.
Although the sand dunes are inviting and it is tempting to stray off the beaten path, visitors should restrain themselves. Walking on the dunes is prohibited because of the possibility of upsetting the fragile natural balance of the local eco-system. Every step could potentially be the starting point of a natural disaster that would take centuries to overcome. The history of the Spit is one long story of survival.
The Spit used to be inhabited by a pagan tribe of people in the 9th century, who we now call the Curonians, hence the Curonian Spit. The area was covered in woods then, which were considered holy to the Curonians. According to legends, they worshipped ancient trees and performed circle dances around them. One of the first Christian missionaries, Adalbert Wojciech, the Bishop of Prague, even lost his life after he ventured into a sacred grove.
Duration: 6 hours