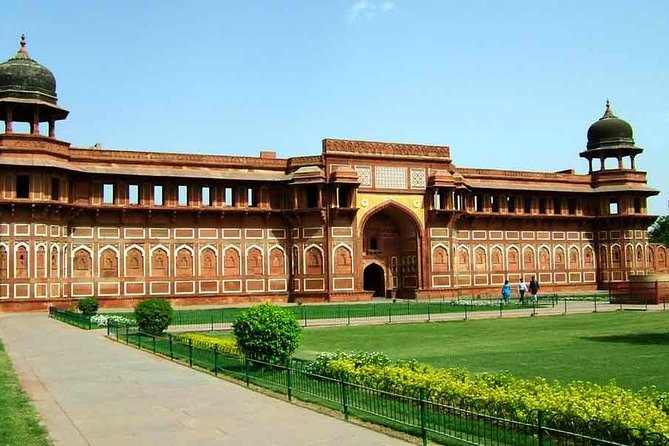 Take a private full-day tour of Agra's Sightseeing, including threeUNESCO World Heritage Sites the Taj mahal, Agra Fort, and Fatehpur sikri.at the Taj Mahal, andhave time for shopping later in the day. Includes, and private guide and vehicle, and hotel pickup and drop-off.

Start early with morning pickup in Agra, then goto the Taj Mahal to watch the sunrise.

The Taj Mahal is one of India's most renowned monuments, and it is designated as a World HeritageSite. Hear from your guide aboutits history as you explore thegrounds.

At 11:30 am, drive out to Agra Fort, thered sandstone fort set in the hills outside Agra.Thearchitecture combines both Hindu and Central Asian styles, and dates to 1565 AD. Discover the labyrinth of courtyards, mosques, and private chambers within the fortified walls of the complex.

After visiting the fort, have 1.5 hours to relax during lunch, thendriveone hour outside of the city to Fatehpur Sikri, another World Heritage Site. It was built by Emperor Akbar in the late 16th century, abandoned after only 14 years, andhas been described as a perfectly preserved ghost town.

Return to Agra in the early evening and have time forshoppingfor Agra's handicrafts such as marble and stoneinlay work, leather goods, brass, jewellery, carpets, and embroidery.

Your tour ends at 7 pm with the transfer back to your hotel, or to the train station.