Palenque Archaeological Site With Agua Azul And Misol-Ha From Palenque 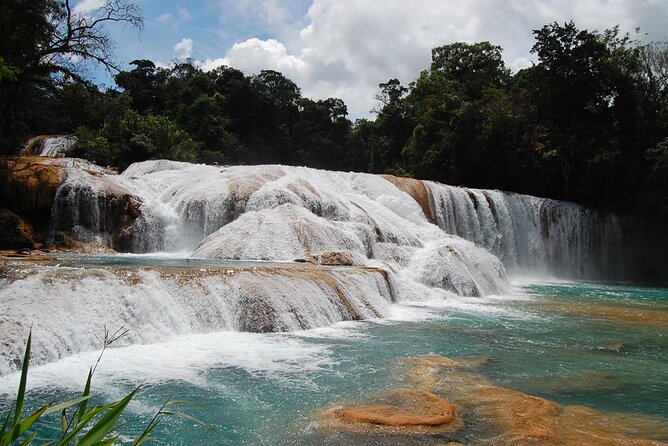 Take inthe beauty of the mountain landscapes around Palenqueon a day trip to Cascadas de Agua Azul and Misol-Ha. You'll descend on foot to the stunning waterfalls, with time for swimming in a deep pool at the base of jungle-covered cliffs(if the weather allows).Travel on an air-conditioned vehicle round-trip or opt for our drop-off option in San Cristobal. Enjoy this half-day tour or upgrade for a full-day tour that includes the archaeological ruins of Palenque.

You will be picked up at your hotel in Palenque in the morning or afternoonand be transferred by minivan toCascadas de Agua Azul, which consists of multiple cascadesfollowing one after another. Admire the indigo blue water and lushvegetation, and listen to the inexhaustible sound of waterflowing into theAgua Azul River.

Here, descendinglimestonestepsforma series of stunning waterfalls that create natural pools, with thelarger cataracts reaching ashigh as 20 feet (6 meters). Intrepid travelers can reach themvia the staircase with the help of aguide.

Then, be amazed at the 115-foot-high (35-meter) Cascadas de Misol-Ha, which empties into a large, tranquilpool under a river cliff of calcareous rocks. If weather permits, there will be freetime for swimming at the falls with caution. Soak intherefreshing falls amid scenery thattypifies the rainforest of the Chiapas highlands.

If you opted for lunch, you're served atraditional meallike fried fish with rice in a rustic hut.Your 5-hour tour ends with hotel drop-off in Palenque, or with bus service to or hotel drop-off in San Cristobal de las Casas, depending on option selected. Alternatively, upgrade toadd a guided visit to the archaeological site of Palenque to complete a9-hour tour.

Local guide only in Palenque Site

Please keep in mind this tour may finish in Palenque or San Cristobal (depending on the option you selected), due to this, at the end of the tour, the whole group will wait around 30 minutes to be transferred to another unit that will continue to the ending point.

The transfers and waterfalls are without guiding assistance

Guide is only included in Palenque Archaeological site

Palenque Archaeological site for the moment has a schedule from 10:00 am to 03:00 pm