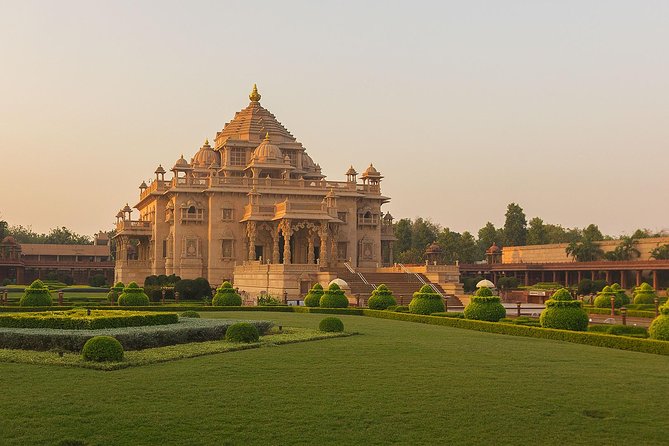 Itinerary
Day 1: Ahmedabad - Arrival transfer
Pass By: Ahmedabad, Ahmedabad, Ahmedabad District, Gujarat
As per flight schedule arrival transfer from airport to hotel
No meals included on this day.
Accommodation included: Overnight at hotel.
Day 2: Ahmedabad City Tour
Stop At: Sabarmati Ashram / Mahatma Gandhi's Home, Gandhi Smarak Sangrahalaya, Ahmedabad 380027 India
On his return from South Africa, Gandhis first Ashram in India was established in the Kochrab area of Ahmedabad on 25 May 1915. The Ashram was then shifted on 17 June 1917 to a piece of open land on the banks of the river Sabarmati. Reasons for this shift included: he wanted to do some experiments in living eg farming, animal husbandry, cow breeding, Khadi and related constructive activities,
Duration: 30 minutes
Stop At: Hathee Singh Jain Temple, Hutheesing Wadi Near Delhi Darwaja, Ahmedabad India
Hutheesingh Jain Temple was established in 1850 by Seth Hutheesing, who was a rich Jain merchant. This temple is dedicated to the 15th 'Jain Tirthankar', known as Dharamnath. The temple is made using white marble, which is adorned with intricately designed carvings. The temple is a double-storied building.
Duration: 30 minutes
Stop At: Shaking Minarets, Sarangpur Gate Near Railway line, Ahmedabad 380021 India
The Shaking Minarets, Ahmedabad or the Jhulta Minar is one of the most unique monuments in Ahmedabad. Located in Siddi Bashir's Mosque near the Sarangpur gate this is one of the beautiful tourist places in the city.
Duration: 30 minutes
Stop At: Adalaj Step-well, Adalaj District-Gandhinagar, Ahmedabad India
The Adalaj Wav Step Well is located 18 kilometers north of Ahmedabad in the Gandhinagar district. It was built during the reign of Queen Rudabai, a muslim ruler. Though now dry, the well once provided water to weary travellers and pilgrims along the roads outside of Ahmedabad. The four-level well is dug directly into the water table, exposing fresh water that rose and fell according the seasons and the amount of rainfall. Its deep interior provided cool relief from the harsh Indian sun.
Duration: 1 hour
Stop At: Akshardham Temple, J Road, Sector 20, Gandhinagar 3820202 India
Swaminarayan Akshardham in Gandhinagar, Gujarat is a large Hindu temple complex inspired by Yogiji maharaj the fourth spiritual successor of Lord Swaminarayan according to the denomination of Swaminarayan (Closed on Monday)
Duration: 1 hour
Meals included:
Breakfast
Accommodation included: Overnight at hotel.
Day 3: Ahmedabad - Departure Transfer
Pass By: Ahmedabad, Ahmedabad, Ahmedabad District, Gujarat
As per flight schedule transfer to airport to board flight for onward destination.
Meals included:
Breakfast
No accommodation included on this day.