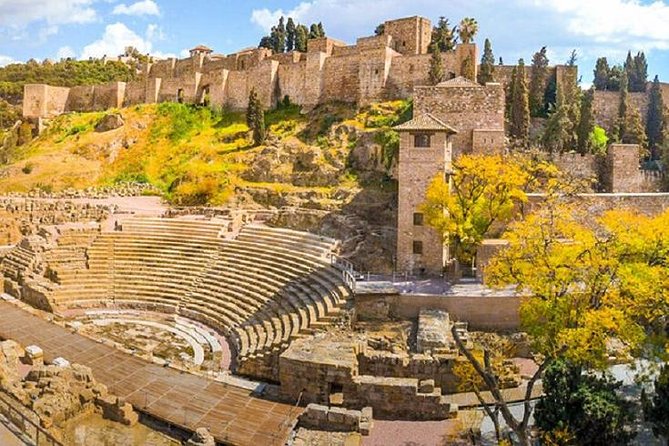 Explore one of the most popular monuments in Malaga and Islamic civilization on this 1-hour private tour with skip the line ticket. Walk with official guide through the Islamic Nasrid Palace and visit the stunning gardensand the nice views from the Alcazaba. La Alcazaba is Malaga's most important landmark, and overlooks the city from a hilltop inland. It is one of two Moorish fortresses in the city, the other being the Castillo de Gibralfaro, situated above. The Alcazaba is the best-preserved Moorish fortress palace in Spain.

Learn about the history of Islamic Malagaon this 1-hour guided tour of the Alcazaba and Nasrid Palace with skip the line ticket. Every hour on the hour, this tour is available. A specialist and historianguide will lead you around the vast complex, dating back more than 1000years. Marvel at the magnificent mix of Islamic art and culture.

Once the tour is confirmed, it will start fromtheentrance area of Alcazaba, which is close to the Plaza de Aduana and the Roman theatre in Calle Alcabazilla, which forms part of the city walls. We willpass through the Puerta de la Bveda (Gate of the Vault), a typical Moorish puerta en recodo (a defensive castle entrance designed to delay the arrival of attackers). A little higher up, we pass through the Puerta de la Columnas (Gate of the Columns), which was built using Roman marble columns to hold up the Moorish horseshoe arches.

Entering the lower precincts of the Alcazaba, you see the second puerta en recodo under the Torre del Cristo (Christ's Tower). This was where the first mass was celebrated following the victory over the town by the Reyes Catolicos, and continued to be used as a chapel. The lower precinct follows the contours of the hill, and you can stop and rest at the Plaza de Armas, which is now a garden with fountains and a bastion on the south side which once defended the coast.

Following the little cobbled paths through the Puerta de los Cuartos de Granada (Gate of the Halls of Granada), which features a row of caliphal arches leading to the Torre de la Armadura Mudjar (Mudejar Armoury Tower) with its 16th-century carved wooden ceiling. The Torre de Maldonaldo (Maldonado Tower), with its original marble columns and balconies, offers the best views so far.

Once the tour is confirmed, the supplier will send you the appointment time with your tour guide as soon as possible