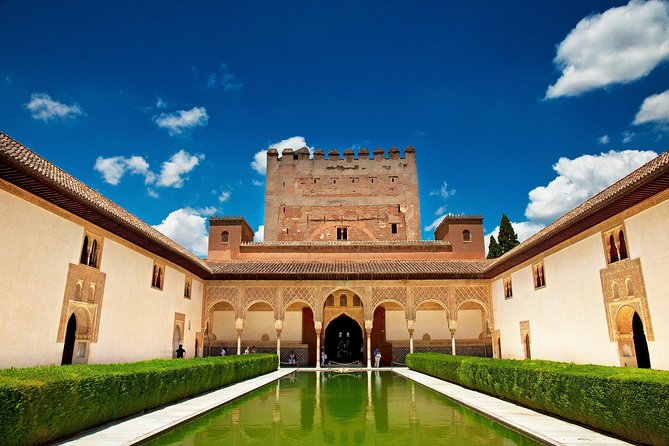 Meet your official guide at the Alhambra entrance and skip the lines as you enter the grounds. Listen on a headset as your guide shares the historical events that took place at this UNESCO World Heritage Site.

Marvel at the architecture, opulent palaces, stunning courtyards and the lush Generalife gardens as you explore with your guide. Learn about the heritage of the Nasrid Dynasty, the efforts of Jewish business, the architecture of the Muslim Palaces and more. Feel free to ask your guide questions throughout the tour.

The tour is only in one language. The one you choose when buying

Your entrance ticket is valid for the Nasrid Palaces, Alcazaba Generalife, Palace of Carlos V, and the Mosque Baths

This is a small group tour, with no more than 20 adult aprox

Once you are assigned to a group, it is not possible to change the language or the starting time of your tour unless Nhue Concierge staff has communicated you previously.

The tickets you will be provided with are special tickets for groups. This means they are assign to the accreditation of your tour guide and they are not valid without such accreditation. Therefore, if you get lost during the tour or you decide to leave the group, you wont be able to enter any of the different monuments (Gardens, Alcazaba nor Nasrid Palaces). We highly recommend you to follow your tour guide during the course of your tour and not to wander around by yourself.

Please note: the Alhambra requires that all passengers provide the full name, date of birth and passport details for each participant when booking. If not provided, the Alhambra may deny access to their premises.