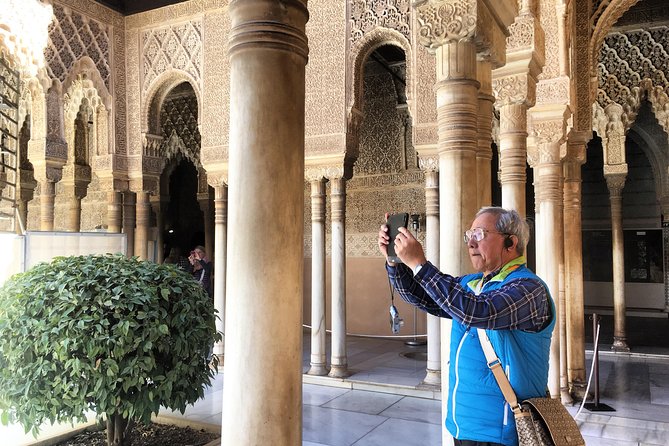 Visit Granadas Alhambra Palace on this full-day private tour from Seville. Discoverthe Alhambra Palace and the Generalife Gardens,one of the most popular monuments in Spain. Learn more about the historyaccompanied by an official and private guide who will show you all details ofthe impressive Moorish architecture and tell you all the secrets and legends of the monument. After the visit discoverGranadas old Moorish district andthe main attractions of the city.

Stop At: The Alhambra, Granada, Province of Granada, Andalucia

On a rocky hill that is difficult to access, on the banks of the River Darro, protected by mountains and surrounded by woods, among the oldest quarters in the city, the Alhambra rises up like an imposing castle with reddish tones in its ramparts that prevent the outside world from seeing the delicate beauty they enclose.
Originally designed as a military area, the Alhambra became the residence of royalty and of the court of Granada in the middle of the thirteenth century, after the establishment of the Nasrid kingdom and the construction of the first palace, by the founder king Mohammed ibn Yusuf ben Nasr, better known as Alhamar. The fortress became a citadel with high ramparts and defensive towers, which house two main areas: the military area, or Alcazaba, the barracks of the royal guard, and the medina or court city, the location of the famous Nasrid Palaces and the remains of the houses of noblemen and plebeians who lived there.

The Generalife is located on the hill Cerro del Sol, adjacent to the Alhambra, is composed of a series of large gardens, where every corner holds a novelty and a pleasant surprise for the eyes.
Some buildings within the Generalife are 'parasitic' structures, the work of later Christian hands, such as the West Gallery in the eastern part of the gardens, and two levels that rise at the northern headwall.

Depending on the schedule provided by the Alhambra monument the order of the itinerary can be changed.

The pick up will be between 6 am and 10 am (depending on the schedule provided by the Patronato de la Alhambra) in your hotel of Seville city center. To confirm the exact time we ask you to call us the day before the tour.

Please note: the Alhambra requires that all passengers provide the full name, date of birth and passport details for each participant when booking. If not provided, the Alhambra may deny access to their premises.