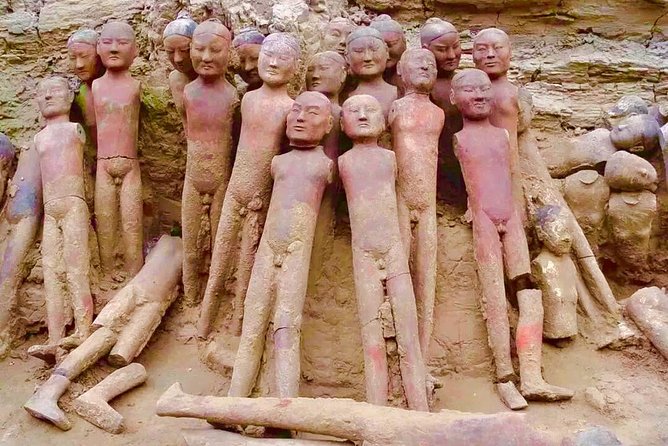 In the morning ,you will be guided to visit the Yang Ling mausoleum which is first undergound museum in China and then have a lunch in the local restaurant and visit the eighth wonder of world ---Terra-Cotta Warriors of emperor Qin .Finally return back.

This place is a must-see when in Xian because it allowed you to get up close with history. This is an underground tomb where the Emperor Jing of Han (206BC-202AD) is buried, only a part of the site had been excavated.

The excavated part hosting the museum is filled with miniature statues of soldiers, servants & animals and women and chariots. Those miniature statues have sat underground for 2000 years. They have clay heads and bodies, but wooden arms, and they were originally dressed in silk before being placed in the tomb.

In many ways, some people felt this was more amazing than the terra cotta soldier museum as you will view the pits through the glass wall and you can walk over and look into the those naked doll sized clay figurines through the glass floors. All the relics shows not only warriors but also various images of court life of Han dynasty including concubines ,eunuchs and officials as well as a vast collection of miniature animal.

About 50 minutes drive, you will get to the Terra-Cotta Warriors museum.

After lunch, you will get to one of the greatest sights of China ---the magnificent the Terra-Cotta Warriors museum. Thousands of life-sized soldiers, each with different expressions and horses. All companions for the burial of the first emperor of China.he is also builder of the Great Wall. The terra -cotta warriors museum is located within a large mausoleum complex built by Qin Shi Huang.

pick-up and drop-off from hotel

Gratuities to guide and driver (recommended)