All Inclusive Private Trip To Kalinjar From Khajuraho

All Inclusive Private Trip To Kalinjar From Khajuraho 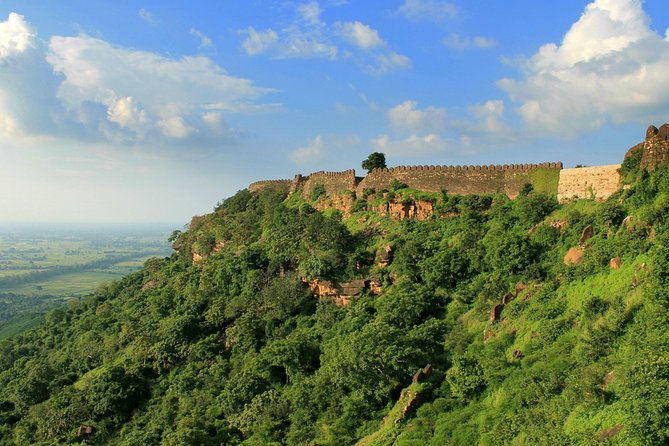 Visit historic Kalinjar Fort and Neelkanth temple on a Private Day trip from Khajuraho. A personal local guide accompanies you to historical monuments while sharing stories and wartime legends. Enjoy the service of Private chauffeur in a comfortable car.

After morning pickup from your hotel lobbyin Khajuraho, you'll drive a distance of roughly 130 Kms to Kalinjar via hills of Panna in the comfort of a private vehicle driven by personal chauffeur.

The fortress is strategically located on an isolated rocky hill at the end theVindhya Range, at an elevation of 1,203 feet (367m) and overlooks the plains of Bundelkhand. It served several of Bundelkhand's ruling dynasties, including the Chandeladynasty ofRajputsin the 10th century, and the SolankiesofRewa. The fortress contains several temples dating as far back as theGuptadynasty of the 3rd-5th centuries CE.

Kalinjar meansThe destroyer of timeinSanskrit. 'Kal' is time and 'jar' destruction. Legend says that after manthan (the mythological churning of the ocean),Hindu God, Lord Shiva, drank the poison and his throat became blue (hence the name Neel (blue) Kantha (throat)) and he came to Kalinjar and overcome the 'Kal' i.e. he achieved victory over death. This is the reason the Shiva temple at Kalinjar is calledNeelkanth. Since then, the hill has been considered a holy site, casting its shadow across the patches of grasslands as well as the densely forested valley. The natural splendor of the surroundings makes it an ideal place for penance and meditation and, surprisingly, a strange mystique still pervades all over the hill.

The Fort is a symbol of cultural and religious glory. This panorama of Kalinjar is marked by the famous temple of agelessNeelkantha, the tallest Kala Bhairavaimage and number of high class sculptures in and around, and artistic friezes strewn throughout the length and breadth of the site and ranging from theGupta periodof the time ofChadellas.

Yours personal guide would be delighted to suggest you the place for lunch, available out of very limited options. Also enjoy the lovely country landscape of central India and make few photo stops for panoramic clicks if time permits while on drive. Return back to hotel lobby in Khajuraho or at Railway Station with happy memories.

Drive From Khajuraho to Kalinjar and back.

Anything not mentioned in inclusions.

We advice yo to carry enough water to drink.

Carry some snacks as there will be limited opportunity to purchase food.