All Inclusive Tour To Muziris From Cochin With Local Lunch - Kochi

All Inclusive Tour To Muziris From Cochin With Local Lunch - Kochi 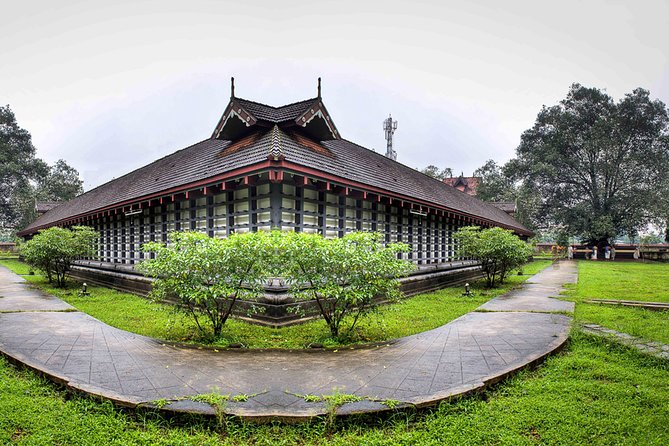 Enjoy visiting the sites of spice trade in the Golden age of India, magical temple, bazaar and ancient port of cochin in Muziris. This tour is ideal for cruise liner passengers and provides a convenient way to see the beautiful backwater and surroundings.

Get picked up by the personal chauffeur from your hotel lobby or from the Cochin port in the morning and drive for around an hour to reach Muziris, the ancient port town of Cochin. The Guide will first take you to the ancientPattnam archaeology site. The Archaeologist believe thatthe site was continuously occupied at least from the 2nd century BC to the 10th century AD.
St. Thomas is believed to have landed in Kodungalloor port (formerly called Muziris) in 52 AD. The St. Thomas Church established by the apostle houses holy relics from the olden days.At Kodungalloor, he established the first Christian church in India.
Walk through the Paravur Spice market where onecan still picture fresh produce unloaded off on 'Vanchis', traditional Kerala boats that are used to this day, to ply the backwaters.
Further walk towards Paravur Jewish synagogue. The Jewish communities who came here in different periods settled in and around Muziris were involved in trade. This Synagogue was built in 1615 and is one among the largest surviving synagogues in Kerala.
Arrive at the Chendamangalam hand loom weaving factory, run by a womens society, the chief livelihood of local women working there. (Closed on Sundays and National Holidays)Chendamangalam fabrics are known for their excellent quality.
In 1420, the jews who came from Kodungallur or Palayur to Chennoth (Chendamangalam) built a Synagogue, a place of worship for the Malabari jews. Enjoy a brief visit to this ancient Chendamangalam Synagogue before stopping for local lunch.
Rice, papadum, rassam, beens vegitable, chutnees, fish and flavoured lukewarm water is the integral ingredients of local lunch in Karala. Depending on your choice you may eat or deny eating fish and meat.
After lunch continue the journey toSree venugopala krishna swamy temple chendamangalam, a famous Hindu temple among locals.
Enjoy visiting Paliam Nalukettu, the Karela history and lifestyle museum and the Paliam Palace museum.Nalukettu was occupied by the women of Paliam Noble family who followed matrilineal system.
Drive through the Kottapuram market.The Kottappuram market is a trade centre that bears the stamp of both native and foreign influences. This Marketwould wake up at 3 am shut down at 3 pm.
Arrive Kottapuram Fort,built by the Portuguese in 1523 .The Fort had a strategic position, on the mouth of the river Periyar before it joins the Arabian Sea, which gave it the advantage of controlling the ships and boats that passed to and from the interior of Malabar. Enjoy watching Chinese fishing net from here in the backwaters of Periyar river.
Visitthe Cheraman Juma Masjid, the first mosque in India and probably one of the oldest shrines in the world, burns an oil lamp which is believed to be more than a 1,000 years old.The mosque is believed to be established in 629 AD.
Drive back to your hotel in Cochin or back to the Cochin port.

Pick and drop from hotel/ Port in Cochin.

Anything not mentioned in Inclusions.