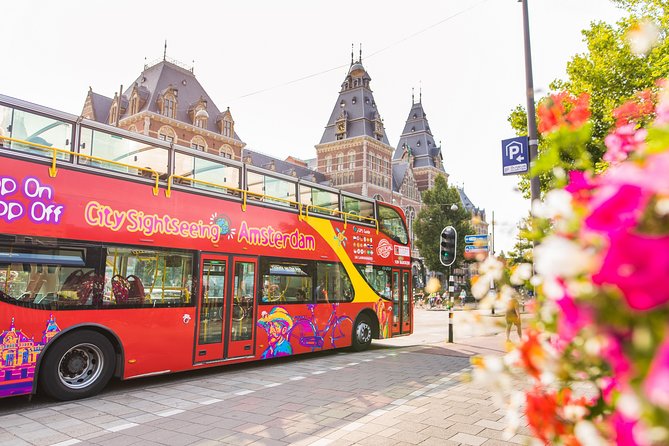 There is no better way to see Amsterdam than on a double-decker, hop-on hop-off bus! See top Amsterdam attractions on this comprehensive sightseeing tour, such as the National Maritime Museum, Heineken Experience, the Anne Frank House and much more. The buses are open top and you can hop on and off as many times as you like at any of the 10 stops around town for 24 hours of sightseeing.

Amsterdam has so much more to offer than the hackneyed clichs of clogs, cheese and coffee shops; its a city that boasts Golden Age architecture, a postcard-perfect canal network and more culture than many other Northern European cities put together. The city screams to be explored with museums, art galleries and eclectic neighborhoods like Jordaan plus of course the historical Red light district.

Aboard a comfortable, open-top, double-decker bus, admire these top Amsterdam attractions, as well as some of the citys lesser-known gems such as Gassan Diamond Factory. Pass Vondelpark, the citys lovely central park, and perhaps hop off your bus at Western Market to visit the Anne frank house arguably Amsterdams most thought-provoking museum.

With your ticket, you can remain on the bus for an entire loop (roughly 2 hours) as you listen to the informative audio commentary, or you can hop on and off at any of the 11 stops around the city to see Amsterdams enchanting delights.

Want to see the city from the water, too? Upgrade to include a hop-on hop-off Canal cruise with your hop-on hop-off tour ticket, and cruise around Amsterdams romantic city canals.

Map with the hop-on hop-off route and stops

Free WiFi on the bus