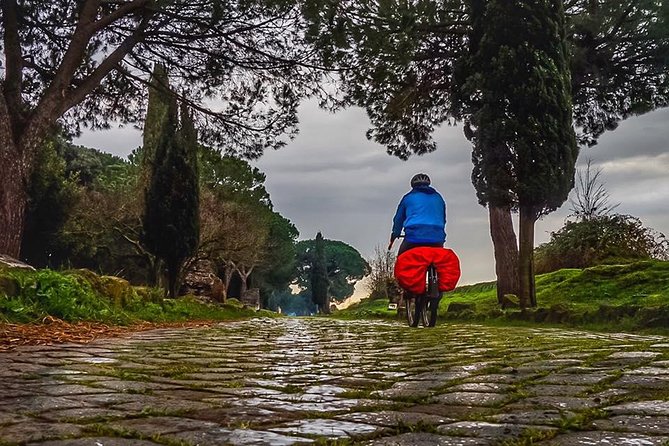 Ride along one of Rome's most impressive ancient roads with a bicycle tour on the Appian Way. Built in the 5th century BC and running for 330 miles (530 km) across southern Italy, this route takes you through historic ruins of Roman civilization, including temples, catacombs, and even an aqueduct.
Meet your guide at Largo di torre argentina, an ancient square surrounded by temples that date back to the Roman Republic, and set off to discover the ingenuity of the ancient engineering around the city. The Appian Way leads you out past ruined monuments, 2 Christian catacombs, and the church that marks the site where Saint Peter had a vision of Christ.

Jump on a sturdy and confortable mountain or hybrid bike and starting at 10:00 am from our shop located at largo Argentina you'll lead to discover the amazing ruins of the ancient Rome.
You'll bike through the Jewish Ghetto, and you'll admire the well preserved Theater of Marcello, the Temples of Hercules and Jupiter till reaching the Circus Maximus, an imponent stadium located in the valley between Palatino and Aventino hills.
Biking toward South along the masted avenue of Caracalla, you'll admire the huge thermal complex of the third Century.
Reaching the Aurelian walls and passing through the S. Sebastiano Roman gate, you'll be on the old Appian way, between nature, mirable ruins and monuments, testimonies of a grandiose civilization.
You'll visit the little church of Quo Vadis,built in the place of the meeting between S.Peter and Jesus Christ, and biking along the park of the Catacombs of S. Calistus, you'll reach the Circus of maxentius, the Tomb of Cecilia metella ( the simbol of the regional Old Appian park), the Capo di bove thermal complex and, along the original Roman Basolato, you'll see the Complex of S. Maria Nova and the Monumental Villa dei Quintili with its marvelous decorations and mosaics.
After acrossing the New Appian Way you'll reach the fantastic Aqueducts Park and, biking trough the Caffarella valley, apiece of the Roman countryside still uncontaminated in the center of the City, you'll end your adventure
- Unique & pleasant way to explore the sights of Appian Way
-Chance to see less-known sights like the Baths of caracalla
- Views of Palatine hill & Parco degli Acquedotti on the route
- Experienced guide leads the way ensuring a fun time for all
- Numerous stops to enjoy sights & take many fantastic photos