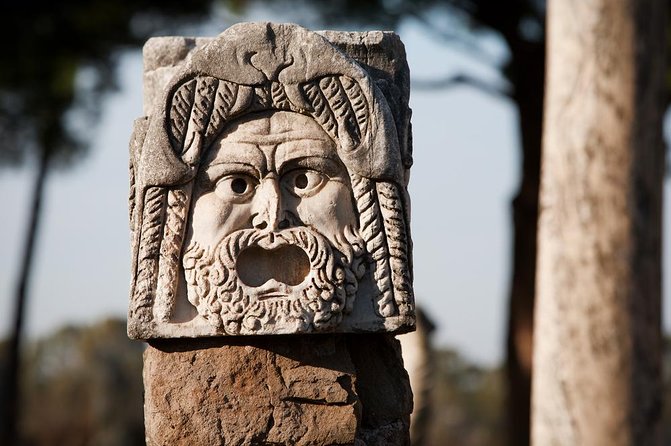 Follow the sea road to Imperial Rome's historic port at Ostia on a half-day morning tour. After a short 30 minutes ride to Ostia Antica, at the mouth of the Tiber river, you'll reach the wonderfully preserved ruins. Tour through the cultural and social life of this historic settlement with a local guide and gain a tantalizing glimpse into the daily life of ancient Rome.

Your visit to Ostia Antica (ancient Ostia) starts at Via Delle Tombe, which leads you to the Porta Romana, one of the city's three gates. This is the beginning of the Decumanus Maximus, the main thoroughfare that crosses the city from north-east to south-west.

You will then arrive at the Terme di Nettuno, where you can admire the beautiful black and white mosaics representing Neptune and Amphitrite, the theatre built by Agrippa, and the Forum which formed the center of the city. Here you will discover the main public buildings, Il Capitolium, the temple of Rome and Augustus, the Basilica and the large thermal baths.

Near the Forum (square) you will also find the House of Diana and the Thermopolium, an ancient Roman bar with a marble counter and a fresco depicting the fruit and foodstuffs that were sold there. At the end of Via dei Dipinti, a museum displays some of the ancient sculptures unearthed at Ostia.

Stop At: Green Line Tours - Day Tours, Rome, Lazio
We wait for the rest of the group at the meeting point, to leave for Umbria.