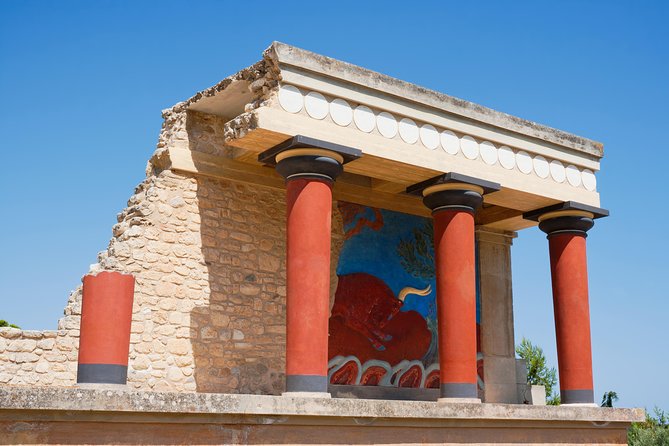 Explore the Minoan Palace of Knossos and the nearby city of Heraklion on a 6-hour Crete tour! With an expert local guide, walk around the ruins and excavations of the islands vast ancient palace (entrance own expense), and learn about the Greek mythological tales that are linked to it. After exploring the labyrinth of corridors and rooms on the Knossos tour, travel into central Heraklion to visit the Archaeological Museum. Relax as you pass sights like the Church of Agios Titos, Koules Venetian Fortress and more. Last stop is at the Minoan Theater in Karteros where you will be taken back in history with a Minoan dance & theatre performance

Leave your Crete hotel by air-conditioned coach and travel to the Minoan Palace of Knossos, one of the islands showstopping historical attractions. The original site is believed to have been built around 1900 BC, but following an earthquake it was rebuilt on a grand scale, and lavish royal quarters, shrines, treasuries and storerooms were added around the Central Court.

After paying your entrance fee, head inside to explore the reconstructed site that was brought to life from a series of 20th-century excavations by British archaeologist Sir Arthur Evans. As you walk, listen to tales and trivia about the palaces glory days during the Minoan era a Bronze Age civilization that made Knossos its capital.

Greek mythology was ingrained in Minoan culture, and the Palace of Knossos featured in many popular tales such as the famous myth of Theseus and the Minotaur. Hear of legends and Greek folklore while exploring areas of the palace like the Throne Room, home to frescoes of the Minoans sacred mythical beasts.

Wander through the Central Court and gaze up at sights like the Grand Staircase. See an impressive fresco of rampaging bulls, and explore the corridors and labyrinth-like alleyways that lead to intriguing rooms such as the Theatral Area a place that may have once existed as a theater.

Then return to your coach for the short journey to Heraklion town where you can complete your knowledge with a visit to the Archeological Museum and admire the greatest collection of Minoan treasures and priceless exhibits in the world. Follows, free time for lunch (own expense) and with your sightseeing over, your tour ends with a hotel drop-off. Enjoy a short break for lunch (own expense) .

After seeing the sights of Cretes main city, your day trip finishes with a hotel drop-off.

The visiting to the Minoan Theater is only for participants for the Areas 2, 3, 4, 5.