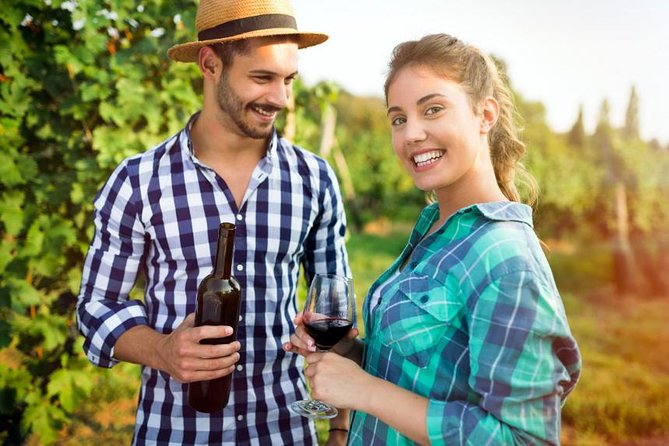 9.30 am Departure from Florence.
10.30 am Visit Chianti Classico Wine Region and through the beautiful Tuscan countryside approaching Siena. Visit Siena on your own and stop at Antica Salumeria Senese for typical authentic lunch and wine/olive oil tasting (Vernaccia, Chianti Classico, Chianti Riserva, Extra Virgin Olive Oil, Vinsanto).
02.30 pm Through the beautiful Tuscan countryside approaching San Gimignano. (the unique medieval city of towers - a UNESCO World Heritage Site) Visit the famous medieval watch towers (we recommend you to climb the Great Tower). Gelato time
4.00 pm We go back to Florence where the tour would be end by 5:00 pm but only after making a stop at Piazzale Michelangelo for a panoramic appreciate the exceptional view of Florence
According the availability we visit Siena in the morning or in the afternoon

Siena (in the morning)

Sienas origins are surrounded by myth: the story goes that the city was founded by Senius, the son of Romulus. Historical statements attribute the first human settlement in this area to the Etruscans, who gave the name Sena to the settlement. After it was conquered by the Roman Empire, the place took on the name of Saena Julia. In the Middle Ages, Siena became an extremely important town, due to its intense demographic growth and the urban expansion of the town. Economic development brought wealth and bitter conflicts. The worst was the one between the Papal supporters (Guelphs) and the Empire supporters (the Ghibellines) After facing a series of internal struggles, Siena which sided with the Ghibellines fought against nearby Florence, which declared itself a supporter of the Guelphs. The tension grew worse and in 1260 a true war began that culminated in the Battle of Montaperti. The Siena Ghibellines were then defeated in the famous Battle of Colle Val dElsa and were sent away from the city, which fell to Guelph rule. The Guelphs ruled the city for a long time. Siena enjoyed its period of maximum splendor starting from 1200, largely due to the Good Government of Nine: this was the form of government that lasted longest in Siena and which allowed the city to flourish both economically and artistically. In 1348 the city was hit by the plague and suffered greatly, also economically and politically: there was a series of governments one after the other, which created instability and which forced Siena to join the Grand Duchy of Tuscany, thereby losing its independence.
1656 was the year when the traditional Palio Race was started. From that moment it has been organized every year in the city, attracting tourists from all over the world.
Between the end of the 18th century and the beginning of the 19th century, Siena fell under the rule of Napoleon, just like other cities in this region. Napoleon proclaimed Florence as the capital of the new Kingdom of Etruria. The Austrians arrived after Napoleon, who ruled until 1859. They were then defeated by the Franco-Piedmont army. In 1860, the temporary government of the newly liberated Florence joined forces with the Kingdom of Sardinia and then, the year after, with the Kingdom of Italy.

Next is the town of San Gimignano, also known for its beautifully preserved medieval towers . 14 left out of 72 initially built in the 13th century. We will walk you to the square of the well, the center of the town for you to enjoy All the fine shops which also sell the local smooth, dry white wine called Vernaccia, and most of all the best ice cream in the world.

Visit Siena (time to visit the Duomo, climb the Duomo and explore the famous main square)

Visit to Michelangelo square in Florence.

Tickets entrance to the Museums