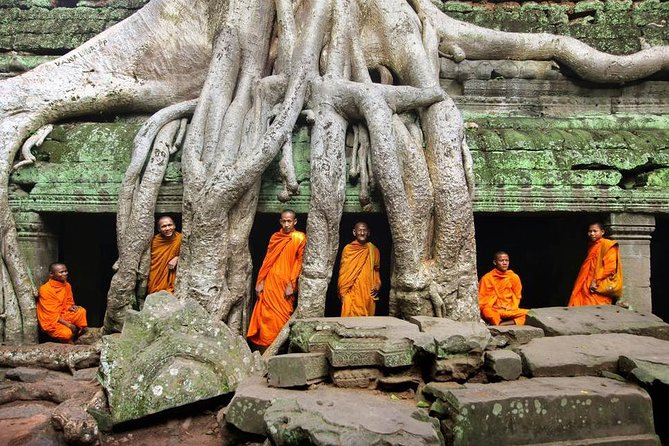 Experience the finest attractions in Angkor Wat Archaeological Park on a private tour in one full day. Visit several temples on a circuit through UNESCO-listed World Heritage sites, with a tour just for you, your family or exclusively with your friends. Marvel at the massive temples of Angkor Wat, the Angkor Thom complex, the Bayon and Ta Prohm alongside your expert guide. End your trip. Hotel transport is provided to and from Siem Reap. Entrance fee to the temples and lunch is included on this tour.

Start your tour after we pickup you in an air-conditioned vehicle from your hotel in Siem Reap between 8 am to 8:45 am. Well then set off for the Angkor Wat Ticket Office where we will get your Angkor Pass.

First stop will be the Angkor Wat, one of the best preserved archaeological sites in Southeast Asia and considered one of the Seven Wonders of the World. Stand in awe as you witness Angkor Wats colossal structures and meticulous architecture. Learn from our experienced guides how the Angkor Wat represents the center of Khmer civilization and how the exceptional Khmer Empire prospered between the 9th and 13th centuries, during which time the Angkor Wat was built.

Explore the beautiful complexity of Angkor Wats vastness from its intricately carved hallways, columns and mysterious chambers to its grand courtyards. With your experienced guide, uncover the symbolic meanings of the fine carvings and bas reliefs for a deeper appreciation of Khmer civilization. As you stroll through the temple, discover small shrines still in use today by the local people.

Then, continue with your guideto the fortified city of Angkor Thom, which covers a sprawling area of 6 square miles (10 km sq). Enter from the monumental South Gate over a picturesque causeway lined on either side by statues of demons and gods, each carrying a giant naga, a deity in the form of a snake.

Stop at the Bayon temple and witness for yourself why this mysterious temple, dubbed as the Temple of Smiling Faces, has become one of the favorite Angkor temples of most visitors. Continue to the Terrace of the Elephants and Terrace of the Leper Kings, then onward to Ta Prohm. In Ta Prohm, get enchanted with the sight of the ruins taken over by tree roots, a demonstration of the awesome power of nature. Learn how thecontroversial site was left by French archaeologists to the destructive power of the jungle.

Head back to your hotel in town after tour.