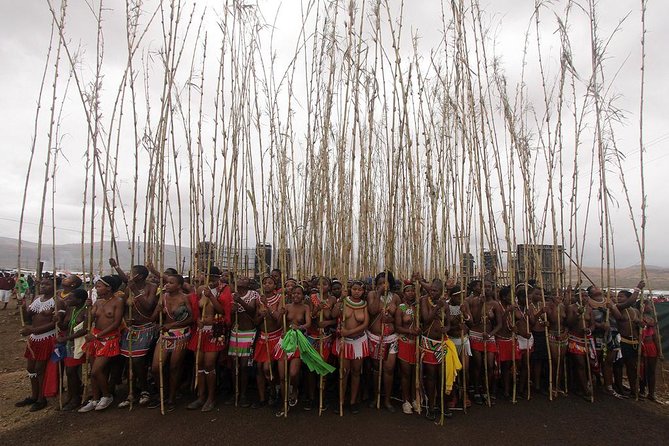 Joining the friends and relatives of thousands of young Zulu maidens attired in traditional Zulu dress to watch them sing, dance and celebrate their culture, is a powerful and moving experience. This annual ceremony, known as the Umkhosi woMhlanga, or the Zulu Reed Dance, is a centuries-old tradition. It takes place in September, right at the start of spring, at the Enyokeni Royal Palace in Nongoma, Zululand. Over 30,000 maidens from all over the country arrive in the area for the traditional Zulu festivities. The Reed Dance is also a celebration of the Zulu nation and performs the essential role of unifying nation and the king, who presides over the ceremony.

Depart from your hotel in Durban from 7am to start this fascinating 3.5 hour journey to Nongoma and King Goodwill Zwelithini's Royal Palace. Lunch, snacks and water included in the package.

As well as joining in traditional singing and dancing, the Reed Dance is an opportunity to school the girls in their culture. Older Zulu women teach the young girls, who have to be virgins in order to participate, about how they should act as grown women. As part of this, they promote celibacy until marriage and teach the girls respect for their bodies. While the lessons and ceremonies are steeped in Zulu tradition and culture, this mass gathering of young people is also an opportunity to discuss contemporary social issues that affect them, such as HIV and teen pregnancies.

For visitors, the highlight of the event is the reed-giving ceremony. Led by Zulu princesses, the young women make a sea of color in intricately beaded outfits as they each collect a cut reed and present it to the king. According to Zulu tradition, the original ancestor emerged from a reed bed, so the laying the reeds at the kings feet symbolizes respect for the Zulu culture. The reeds are also used to build traditional Zulu huts and to craft the mats and baskets for which the Zulu people are famous. Zulu men also participate in this part of the ceremony, singing and mock fighting.