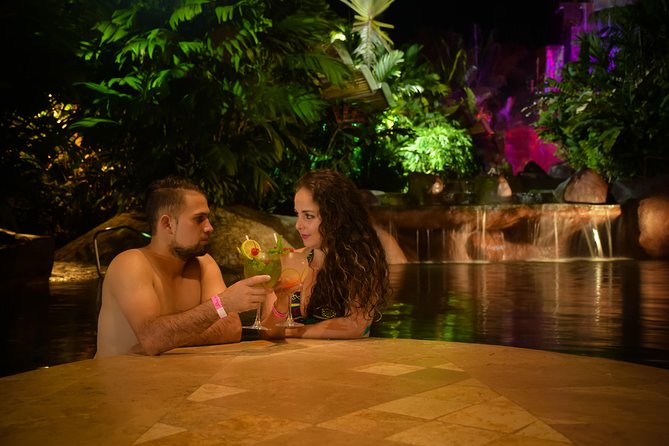 Experience Costa Ricas world-renowned Arenal volcano and Baldi Hot Springs on this exciting full-day trip from San jose. Feel the rush of adrenaline as you visit Arenal volcano National Park and view one of the most active volcanoes in the western hemisphere! Enjoy a complimentary lunch and spend time relaxing in the thermal regions rejuvenating hot springs. Then, indulge in a gourmet dinner as you continue admiring the stunning Arenal volcano a truly unforgettable experience! Receive personal attention on this small-group tour, limited to 20 people.

Combine adrenaline and relaxation as you view Arenal Volcano and soak in Baldi Hot Springs on this rejuvenating day trip from San jose! Your expert local guide will pick you up at your hotel and take you to Arenal Volcano National Park. En route to La Fortuna, stop for approximately 30 minutes in the artisan town of Sarchi, where youll have an opportunity to admire the colorful oxcarts or shop for souvenirs.

When you reach the park, experience the thundering Arenal Volcano from a safe viewing area. Since a major eruption in 1968, this stratovolcano has been one of the most active in Costa Rica, with mild and nearly continuous explosive activity from the conical crater, whose summit reaches an elevation of 5,436 feet (1,657 meters). As you watch for any lava flows, clouds of smoke or ash, your guide will share information about the parks thermal features.

After your thrilling show, enjoy a complimentary lunch at the Arenal Volcano Inn Resort or La Perla Restaurant. Spend your afternoon soaking in the regions rejuvenating thermal baths and mineral pools at Baldi Hot Springs Hotel and Spa. This family-friendly spa consists of several therapeutic pools of varying temperature, allowing people of all ages to steep in relaxation.

Later, enjoy a gourmet dinner under the stars at the hot springs and continue admiring one of the world's most active volcanoes!

Each passenger must sign a waiver prior to tour commencement

Note: Visibility of Arenal Volcano depend on weather conditions

Note: Transfer from San Jose to La Fortuna takes about 3.5 hours each way.