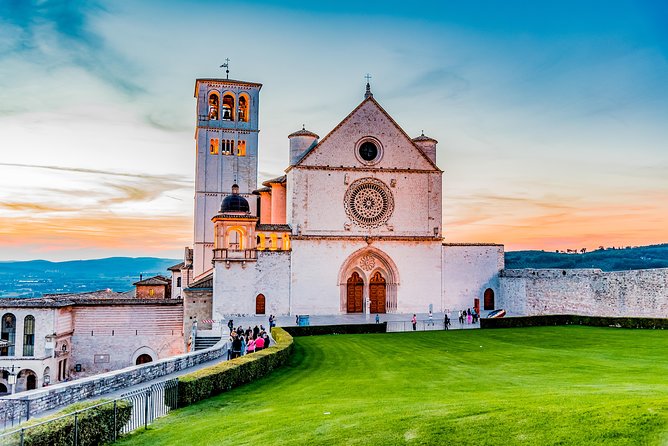 When you travel from Rome to Orvieto and Assisi on this full-day trip by air-conditioned coach, you get to soak in the flavor of two charming towns set amid picture-perfect Italian countryside. Start your day in Orvieto to see its Gothic showstopper, Orvieto Cathedral, followed by mouth-watering lunch near beautiful Lake Trasimeno. Then explore the UNESCO-listed town of Assisi in Umbria and stop in Santa Maria Degli Angeli to admire its 9th-century Basilica. Taking Assisi And Orvieto Day Trip From Rome is the best way to discover hidden gems in Italy.

We wait for everyone to join the group after picking up at the meeting point to leave for Umbria.

Leave Rome and travel north by air-conditioned coach, following the River tiber toward Tuscany. After roughly 1.5 hours on the road, you will arrive in the gorgeous and historic town of Orvieto.

Stretch your legs and walk around the town, seeing highlights like the 14th-century Orvieto Cathedral, a masterpiece of Gothic architecture with a glistening facade of stained glass, mosaics, and sculptures. Soak up Orvietos charms and admire the countless churches that are scattered around its center.

Return to your coach and travel through the rolling hills toward Umbria, Tuscany's lesser-known but just as captivating neighbor. Stop for lunch on the shores of Lake Trasimeno to enjoy traditional Italian cuisine, and then continue to the UNESCO World Heritage-listed town of Assisi.

Get a chance to explore this historically as well as religiously significant site on your Assisi And Orvieto Day Trip From Rome. The building is characterized by the execution of the whole body with pink and white bands and by the majestic flying buttresses supporting the two sides of the church.

On the way to visit the basilicas of Santa Chiara and Santa Maria degli Angeli, we pass through the Palazzo del Capitano del Popolo.

Before your tour ends, enjoy a final stop in the town of Santa Maria degli Angeli to see its beautiful basilica, a 9th-century church where St Francis reportedly worshiped. Head back to Rome and finish your tour at the start point in the early evening.

A symbol of the city itself, the Duomo is one of the most beautiful in Italy. The intent was to create one large cathedral for the city, to replace two decaying churches that existed there before.

Please note: This is a Multilingual Tour.

Dress code is required to enter places of worships and selected museums. No shorts or sleeveless tops are allowed. Knees and shoulders MUST be covered for both men and women. This dress code is strictly enforced and you will risk refused entry if you fail to comply with requirements.

Minimum numbers apply (we require a min. of 6 pax from 1st Nov until 31 st March). There is a possibility of cancellation after confirmation if there are not enough passengers to meet requirements. In the event of this occurring, you will be offered an alternative or full refund