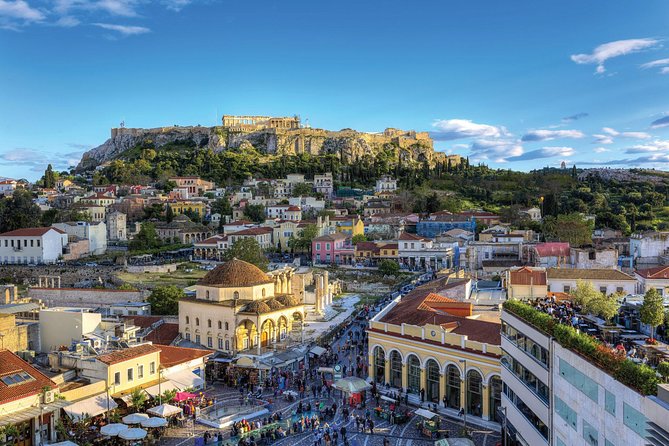 With this Athens Super Saver, combine two best-selling tours for a two-day immersion in Athens and Delphi. See top sights on a half-day tour of Athens, from the Acropolis to Omonia Square. Then take a full-day trip to explore the historic sites of classical Greece at Delphi, considered the center of the earth and the universe in ancient times. Each tour takes place on a separate day, and its your choice whether you do the Athens half-day tour on Day 1 and visit Delphi on Day 2, or vice versa. Plus, receive a discount by booking these two tours together!

Your guided half-day tour of Athens combines the citys historic and modern sights, from central Omonia Square to the changing of the guard in Constitution Square. After taking a drive with your guide past the Panathenian Stadium, site of the first modern Olympic Games in 1896, travel into the past at Athens crowning beauty, the Acropolis.

Tour the Parthenon, Athena Nike temple and beautiful Porch of the Maidens, and learn more about The acropolis and its ruins at the new Acropolis museum.

More temples await at the archaeological site of Delphi, dedicated to the worship of Apollo and site of the legendary Delphic oracle in classical times. Leave Athens by air-conditioned coach for the drive to Delphi, stopping briefly to stretch your legs in the town of Levadia, a small central Greek town near legendary Mt Parnassus. Leaving Levadia, continue to the winter-time ski resort town of Arachova on the slopes of Mt Parnassus. While taking a stroll around Arachova, note the traditionally hand-woven flokati rugs for sale in the towns shops.

Next stop is the famous archaeological site of Delphi, where youll take a guided tour of the legendary ruins, first excavated in 1882. Ancient Delphi was the site of a sanctuary to Apollo, and home to the Greek worlds most important oracle, who received prophecies from the gods.

Your tour includes a visit to Delphis most important building, the ancient Temple of apollo, now a poignant collection of pillars and steps, and once housing an eternal flame. Follow the sacred way to the restored Athenian Treasury, a classic temple design with Doric columns.

Youll also visit the sites stadium, where musical competitions and the Pythian Games, similar to the games of Olympia, were held every four years; the first games took place here in 776 BC.

While in Delphi, youll also visit the sites archaeological museum, filled with statues of athletes, gold and ivory from the site, along with its famous piece, the bronze statue of a charioteer.

Your tour includes a Greek lunch in the modern-day town of Delphi, which neighbors the archeological site.

Free Wifi on the coach

Entrance tickets to Acropolis and Delphi

Overnight accommodation (you return to your own hotel after Day 1 and continue with the second half of your tour on Day 2; you must have your own accommodation)

Pick up from Piraeus port, airport, airbnb and apartments

Port , airport or private apartment pickup are not available .

Very important: Children aged 5 to 12 years old must hold passport or ID in order to get the discounted price. Otherwise they will pay entrance ticket to the Archaelogical sites or Museums.

Mask: is mandatory for clients and staff in the bus and closed museums